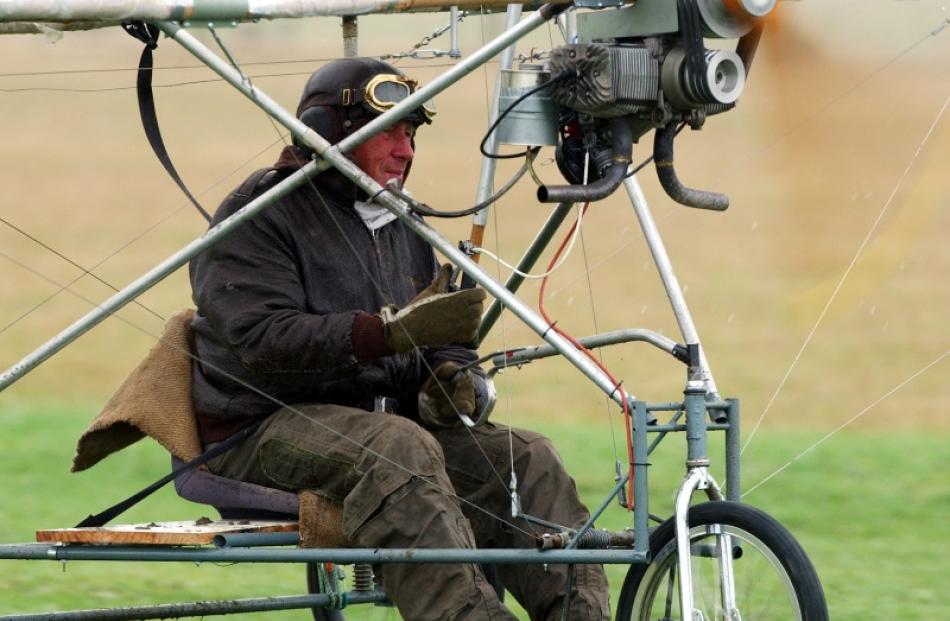 Jack Mehlhopt at the controls of a bamboo and bicycle tubing aeroplane in 2003. Photo by Getty

A Canterbury senior sergeant and a veteran pilot have been named as the two victims of a fatal microlight crash in Timaru last night.

Senior Sergeant Hohi "Randel" Tikitiki, 51 and his friend and flight instructor Alfred "Jack" Mehlhopt, 86, had taken off for a routine training flight from Richard Pearse Airport, in Timaru around 7pm, but crashed 30 minutes later.

The microlight crashed on farmland, 11km north of Timaru. Seadown Rd resident Mark Phillips last night said the plane had landed on his farm about three or four paddocks from his house.

Canterbury Police district commander Superintendent Gary Knowles said that Mr Tikitiki's death had rocked not only the community in Timaru but everyone at Canterbury Police.

"Randel was a valued friend and colleague to many in New Zealand Police and a respected member of the community in Timaru.

He had worked for police for 28 years, following in the footsteps of his father, Mr Knowles said.

"His professionalism and passion for the District will be sadly missed. The thoughts and prayers of everyone at Canterbury Police are with the friends and families of Randel and Jack, two men who made a real difference to so many lives.

Mr Mehlhopt's family released a statement saying: "Jack was a loving father, uncle, grandfather and great-grandfather and will missed by his friends and family.

"Jack was an extremely experienced aviator having held a pilots licence since the age of 16.

"Aviation was his lifelong passion. The fact he is never coming home again is something that is very hard to get your head around.

"We are all extremely upset and ask the media to respect our privacy while we grieve.

"We intend to celebrate Jack's life at a private funeral for his friends and family and again ask the media to please not attend or approach our guests for comment."

Mr Tikitiki's family also released a statement saying: "Randel was the loving father of twin girls and enjoyed spending time with them in the amazing countryside in mid-south Canterbury.

"An avid fisherman he was as at home with a fly rod in his hand as a spinner.

"He was a dedicated police officer and we thank Canterbury Police for their support while we come to terms with the fact that Randel is not coming home.

"We are all understandably upset and ask that the media respect our request for privacy while we work through our grief."

The families and friends of both men were being supported by Canterbury police and Victim Support. Their deaths have been referred to the Coroner.

A cordon remains in place around the crash site.

A police investigation was underway and investigators from the Civil Aviation Authority were due to visit the scene this afternoon.

Anyone who had seen the microlight during its flight or had any other relevant information were asked to call Timaru police on 03 687 9808 or Crimestoppers anonymously on 0800 555 111.