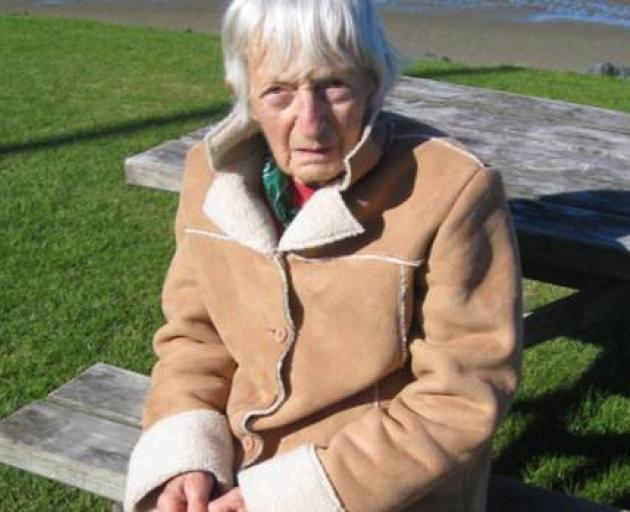 Maree Wilkins, 85, went missing from her rest home in 2017 and was this week declared dead by a coroner. Photo: NZ Herald / supplied
A woman who disappeared from a dementia care facility in 2017 has been declared dead by the coroner in a report which blames staff for the length of time before she was discovered missing.

Helen Maree Dale Wilkins, known best as Maree, disappeared from Leigh Road Cottage some time between 5.30pm on November 7, 2017, when she was seen in the garden and when a staff member noticed she was missing at 6.45am the next morning.

Police and Search and Rescue scoured both land and sea around Whangateau but found no sign of the 85-year-old before the search was called off at the end of November.

In September 2018 the police passed the case to the chief coroner because they believed Wilkins was dead and this week Coroner Debra Bell released findings in which she agreed.

Bell outlined how Wilkins, who had no family in New Zealand, came to move into the rest home six months before her disappearance.

Her husband, Stuart, had died and the couple had no children. Her closest relative was a niece in Western Australia.

In March 2017 police contacted the Rodney Community Mental Health Team for Older Adults because Wilkins had repeatedly reported burglaries but when officers arrived they found the items reported stolen were still in the house.

A psychiatrist who saw her said she had Alzheimers with behavioural and psychological symptoms.

In-home support was arranged but even that was not enough to help Wilkins cope with daily life activities so she was moved into Leigh Road Cottage, now known as Bethany Hill Dementia Care, on May 21, 2017.

She was not in the most secure part of the facility so was allowed access into an enclosed garden area.

On November 7, staff gave her dinner and her medication about 5pm and reported she seemed happy. She was last seen in the garden about 5.30pm.

Staff assumed Wilkins had taken herself to bed as she often did. Neither the evening staff nor those who came on shift at 10.45pm opened her door to check on her because it was known that would wake her.

At 5am staff discovered she was not in her room but assumed she had gone to the lounge.

Her room was tidy and the bed appeared not to have been slept in, the coroner's report noted.

About 6.45am a staff member noticed Wilkins was not in the upper lounge where she would usually be at breakfast time. They asked if anyone else had seen her but no one had.

Staff searched the building and the grounds but did not find her so the manager and police were informed. A police search of the premises also found nothing.

Police searched the area for weeks and found nothing to indicate foul play, so concluded Wilkins likely found an opportunity to escape and wandered onto the coastal road before entering the water and being swept away by strong currents.

Numerous friends reported that Wilkins was unhappy at the rest home and wanted to leave. They also said she had mentioned wanting to walk into the sea to end her life because she was frustrated by her situation.

Despite that, the coroner said she could not rule her death a suicide because there was no evidence she intended to end her life that day.

"It remains a possibility that she left the facility and became confused and unable to return," Bell concluded.

A report provided to Waitemata District Health Board by Leigh Road Cottage found staff did not follow company procedure by checking on residents at 1am and 3am as well as 5am. Staff were also not sure if she was inside when the facility was locked at 7pm.

How and where Wilkins managed to escape was unable to be determined because there were no cameras, the report found.

It was also revealed there had been other instances of residents escaping which had not been reported to the DHB. In one of those, a man was missing for six hours when he was let out by a visitor.

Leigh Road Cottage has since required staff to physically check on residents hourly between 7pm and 6am, and sign a daily checking record.

Double sided-locks were placed on the back gate, a new gate was installed at the front of the facility and a camera was installed.

Given all the changes made, Bell had no further recommendations to make.

"I do record that Leigh Road Cottage staff's failure to follow correct processes on the night of Mrs Wilkins disappearance contributed to the length of time it took to determine that she was missing. Additionally, there was the reasonable expectation that the facility was secure and Mrs Wilkins would not be able to leave as she did," Bell summed up.

"I note the DHB is satisfied with the changes made by Leigh Road Cottage. I am hopeful that these changes will reduce the chances of further deaths occurring in similar circumstances as Mrs Wilkins."

Bethany Hill Dementia Care manager Dennie Chew told the Herald they had nothing to add to what was presented to the coroner.

"We are grateful that there is a closure to this incident and we accept the findings from the coroner's report. Our deepest condolence to Maree's family and friends for their loss."

"We recognise the release of the coroner's findings will be a difficult time for Ms Wilkins' family and friends and our thoughts are with them today."