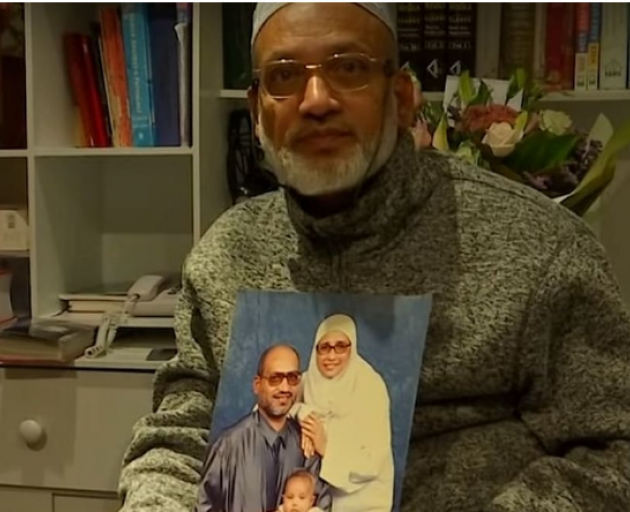 Farid Ahmed's wife was killed at Al Noor Mosque. Photo: YouTube screenshot
A group of survivors of the Christchurch mosque attack are travelling this week to an annual Islamic pilgrimage for the first time since the tragedy.

The group were originally invited to attend the pilgrimage to Mecca, known as the Hajj, by Saudi Arabian king Salman in 2019 after the attacks.

But most were prevented from attending due to continuing Covid-19 restrictions.

Families have been grieving since a white supremacist stormed a Christchurch mosque in March 2019, killing 51 people.

One of the survivors travelling, Farid Ahmed, said he would carry his wife Husna's memory to the Hajj.

She was shot saving children at Al Noor Mosque.

"This trip is for her sacrifice, she has given her life."

He said it would be a healing experience for the community.
"When we are going together as victim families, we have similarities of some sort because somewhere, all of us have been suffering and we are survivors."

"Some people are still struggling but time will heal them."

Ahmed said the families had developed strong bonds in response to the tragedy, which had helped get them through dark times.

"There are many layers of bondage, and all these things I look at as positive."

Ahmed said he viewed the Hajj as a peace conference.

"Millions of people that come from different races. They come together in peace and harmony, and this is the biggest inspiration for me."
Since the attack, Ahmed has written a book to celebrate the life of his late wife, attended conferences around the world including the Peace Forum in Abu Dabi, and has worked to teach young people about religion.

In December last year he was made a member of the New Zealand Order of Merit.

"The work I had been doing, it did not start after the 15th of March."

Restrictions are being lifted for the Hajj this year to host one million people. Numbers reached 2.5 million before Covid-19 affected attendance.

It is due to begin Thursday in Saudi Arabia.