Mikala Stokes (21) posted a photo on social media in the early hours of this morning.

The selfie caption read: "From court to club".

Earlier in the evening, after Troy Taylor, the man who blamed her for killing her 14-month-old son at their Christchurch home in July 2015, was found guilty, Stokes posted photographs of her playing beer pong.

One of Stokes' friends on Snapchat, Julie Stechmann, screen-grabbed the nightclub photo, which was posted at about 1am. 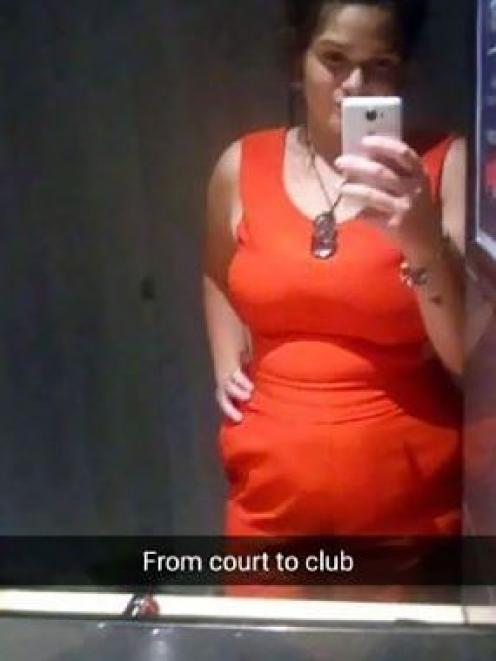 She told the Herald today that she thought it was strange behaviour.

"Who goes out clubbing that night? It's not normal behaviour," Ms Stechmann said.

Ms Stechmann, a city tattoo artist, was a defence witness during the high-profile murder trial at the High Court in Christchurch.

She told the jury how she saw 23-year-old Taylor earlier on the day Ihaka died.

Troy Kevin Taylor (23) had denied murdering the 14-month-old boy during a two-week trial at the High Court in Christchurch.

He claimed that his then-partner and Ihaka's mother Mikala Stokes inflicted the boy's 59 fatal injuries on July 3, 2015 while he was out getting a tattoo.

But after four hours of deliberations, a jury of six women and six men were unanimous in finding Taylor guilty of murder.

He had talked of plans to go away for a weekend and how they'd taken Ihaka to see a doctor that morning after finding bruising on his jaw.

When he left after getting the new tattoo, he seemed "perfectly normal, just Troy", Ms Stechmann said.

Stechmann saw Stokes, Taylor and some other friends in a shopping mall just two days after Ihaka died.

"Troy was telling me what happened, because I hadn't realised, and Troy started crying, the others started crying, and [Stokes] was just standing there emotionless. That has always stuck with me," she said.

Ms Stechmann also questioned some of her social media posts during the trial.

She posted photos of her and Taylor, along with messages of: "I will always love you".

After eight days of evidence, the jury deliberated for just four hours to find Taylor guilty of murder and assaulting the small boy the day before he died.

Taylor mouthed "no" as the verdicts were read out, while family members in the packed public gallery gasped, "no way".

He will be sentenced on June 9.