The former Air New Zealand CEO, whose name is often mentioned as a future National leader, told Q+A's Jack Tame on Sunday that Collins was "doing a tough job at a tough time".

It comes after another tough week for the Opposition party with two polls showing their policies and leader failing to connect with voters, with support slipping further and into the hands of Act.

In a poll commissioned by the Taxpayers' Union, run by National's private pollster Curia, the party had just 21 per cent.

Collins also had just 4.4 per cent support as preferred prime minister, well behind Act leader David Seymour on 9.3 per cent.

Prime Minister Jacinda Ardern remained the most popular by far with more than 50 per cent.

Meanwhile a poll by UMR this week had National slightly higher on 26 per cent, but still slipping from its previous rating.

The poll results have had many commentators call time on Collins' run as leader, but Luxon defended her and said it was also up to the wider party to pick up its act.

"Leader of the Opposition is always tough at the best of times, you've only got to look at the last 15 years of Opposition leaders to see how hard it actually is," Luxon said.

"It's not actually just about the leader, it is actually about all of us, 33 in that caucus, and all of the National Party members who actually as leaders in their own personal capacity have to lead themselves and engage and think and reinvent where this National Party wants to go going forward." 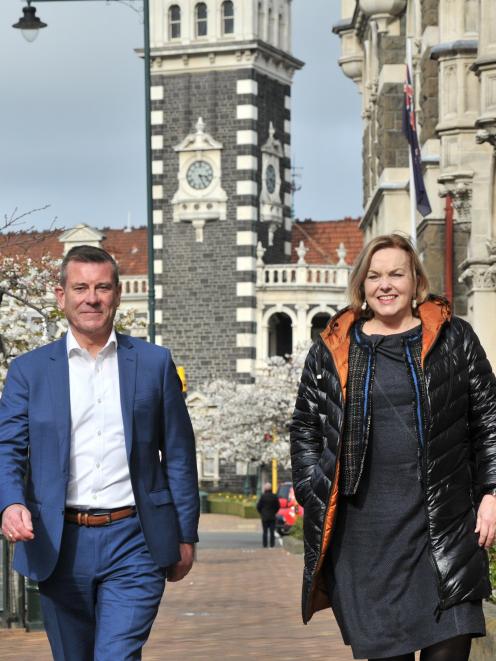 Dunedin-based National list MP Michael Woodhouse and National Party leader Judith Collins. Photo: Christine O'Connor
During the interview Luxon, who entered Parliament just 10 months ago at the 2020 election, avoided any speculation about his leadership potential but said he had "a lot to learn".

"I've got a lot to learn Jack, I mean, there's a big change here coming from a business background into a political background," he told Q+A.

"I've got to be able to master and understand my electorate, the party. Parliament's an odd beast at the best of times, a lot of protocols there that I've got to learn, and most importantly I've got to master my portfolios and the policy areas and actually come up with thinking and ideas around that."

Luxon said National's "absolutely shocking result at the last election" meant there were still many areas it had to improve in.

"We have to play as a team in Parliament and actually work together and that's starting to happen but there's more work for us to do on that," he said.

"We've got to continue to evolve the National Party, we've got to keep the good things about it but we've also got to have the courage to change and evolve with things that need to do so."

He said there were many "very successful centre-right governments around the world", and National had to find a better way to connect their values to the "daily lives of people across New Zealand".

"I think the third thing and the most important thing is actually we've got to make sure our messages have relevance to people in this day and age.

"We got a lot of work to do to rebuild back trust and relevancy back with the New Zealand people."

Looks like Chris has his eye on the prize....never ever trust anything said by anyone associated with National, especially when the leader is a lame duck. Quack!

And jacinda is our most honest politician...she will in time be remembered for being domestically a failure and responsible for many many billions wasted with our youth encumbered with the debt. Take away partisan politics and look at that debt- its staggering, beyond anything this country has ever experienced.

If it wears blue - never trust. Luxon does want to be PM. However he knows he has no experience. It would take someone very experienced to get one over Jacinda. Judith is great for ACT & Labour. She is no PM material, so if Natz want a new leader, Reti is the only choice - but he too would get spat out by Jacinda.
Seriously, best thing for the blue, is to start a new party with rules policies & principles.
PS where do i make my statements from? I watch Parliament TV live, so i see the real them - not what you lot have interpreted for you in the media.

So if you watch parliament tv you will also see our PM being the most disrespectful and opaque member in the house too?