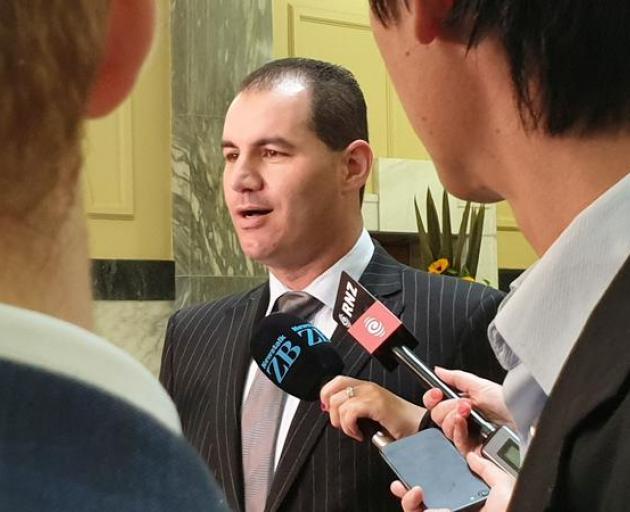 Independent MP Jami-Lee Ross. Photo: RNZ
Jami-Lee Ross can be revealed as one of four men charged by the Serious Fraud Office over allegations about two $100,000 donations to the National Party.

Suppression was lifted this afternoon for the 34-year-old former National Party member, who faces two charges for the alleged use of a "fraudulent device, trick, or stratagem" to split up the two donations.

In a statement to the New Zealand Herald today, Ross spoke for the first time about the allegations levelled against him by the SFO.

He said the charges were "outrageous", while he has become a victim of dirty politics and been painted as a scapegoat.Ross said he was shocked to be "targeted" by the SFO and will defend the allegations in court.

The Botany MP was kicked out of the National Party last year and lodged a complaint with police in October 2018 after making a string of allegations against National and its leader Simon Bridges.

Ross' complaint was referred by police to the SFO in March last year.

He claimed Bridges had asked him to collect a $100,000 donation from philanthropist and businessman Yikun Zhang, which was then split into smaller amounts to hide it.

Zhang, 48, is one of the other three men charged by the SFO. He was awarded a New Zealand Order of Merit in 2018 for services to New Zealand-China relations and the Chinese community.

The other two are businessman Shijia (Colin) Zheng, 34, and Hengjia (Joe) Zheng, 34. All three also had their name suppression lifted today.

In his statement at a downtown Auckland law firm, Ross told the Herald: "I always wanted to make it very clear that as the whistleblower on this deception, it was outrageous that I was then charged and that others were seeking to implicate me, making me their expendable scapegoat."

Ross said his decision to go to the police - sparking the SFO investigation and subsequent charges against him - was "not just because I had been the victim of broken promises made to me by Mr Bridges".

Rather, he said there was an issue which needed to be "openly and honestly addressed for the benefit of the country".

"I was the whistleblower, and as a result, ever since I have been attacked by the [National] Party and its supporters for bringing this matter to the attention of the nation.

"Some seek to make me out as the bad guy. While that may be convenient spin for the party, I will not be the National Party's fall guy," Ross said.

"Unfortunately I remain constrained at this time in what I can say, as the issue is now before the court. As much as I would like to provide detail and evidence about what I now know, my lawyers have reiterated to me that these matters need to be tried in court and that it is not permitted for me, or anyone else, to try and do so in the media.

"I will say all that I need to say when I am permitted to do so."

Despite saying this, Ross continued and said he wanted "everyone to know and understand my position".

"I have never been involved in any deception to do with donations."

A spokeswoman for Bridges referred questions to a spokesman for the National Party, who said: "We stand by our previous statements on this matter. As it is before the courts we have no further comments to make."

Bridges has repeatedly said no one in the party had been charged relating to the two $100,000 donations, and that he had no knowledge about the second $100,000 donation, which was made at a time when Sir Bill English was National's party leader.

"I have always maintained. As I have always said the allegations against both myself and the party were baseless and false," Bridges said in a statement from the National Party released shortly after charges were laid.

"This was always just a vendetta by a disgruntled former MP."

Speaking in the House today during the debate on the Prime Minister's statement, Finance Minister Grant Robertson started to speak about the charges.

But Speaker Trevor Mallard stopped him, saying that Standing Orders did not allow an MP to speak to the House about matters that were before the courts without the Speaker's permission, which had not been sought.

Act Party leader David Seymour said he had rejected a number of dinner invitations from Zhang.

Seymour noted the current charges involving Ross for donations to National, the Serious Fraud Office investigation into the NZ First Foundation, and ongoing questions around the photographs of journalists reporting on donations to NZ First.

"I think it's a disgrace and New Zealanders are quite rightly questioning what is going on in New Zealand politics ... The amount of sleaze in Wellington is unprecedented."

Seymour said Ross had isolated himself and put himself in a difficult place.

"Just on a human level, I hope he's doing okay."