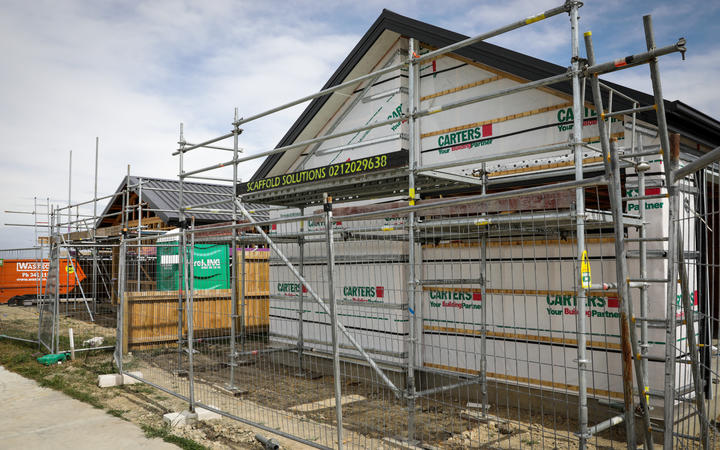 The new rules are being touted as able to deliver as many as 105,500 new homes in the next five to eight years. Photo: RNZ
A bill to allow three homes up to three storeys high on one existing section is stirring controversy as it is rushed through Parliament.

Some submitters call it "ad hoc", but others say it is "vital".

The new rules are being touted as able to deliver as many as 105,500 new homes in the next five to eight years.

Local Government New Zealand (LGNZ) deputy chief executive in charge of policy Jason Krupp said the legislation was not perfect - but in paving the way for mass multi-storey intensification, it was a breakthrough.

"It's absolutely a big deal and is an absolutely vital and necessary step in tackling housing affordability.

"Policymakers have known for over three decades that they have to go 'up' and no one's been willing to jump on that ... because they know it's not a vote winner. So the fact that we've broken through that deadlock is a very important first step."

However, the urgency surrounding the bill is making councils nervous.

"It has the feeling of policy being made in Wellington with little interaction with the operational reality on the ground," Krupp said.

Some flat out oppose it - Hamilton City Council's submission calls for it to be withdrawn because its "blanket" nature will undermine the city's more targeted approach.

LGNZ is telling councils they can expect to see flexibility introduced later in how it is applied.

Lobbyists were last night busily working on their submissions to meet the Government's super short cut-off of midnight.

One of them, Environment and Conservation Organisation co-chairperson Barry Weeber said the bill ran counter to the country's biodiversity strategy.

"There's nothing in it in regard to urban trees ... it doesn't consider climate change.

"And then there's water, waste and stormwater, how the infrastructure is going to be developed for these new houses."

It was ad hoc, and collided with what councils were already doing on intensification under the 2019 National Policy Statement, Weeber said.

"You would think that there's some people [who] would have thought about it.

"The select committee is going through a very short process, and it's announced out of the blue. It's a really strange process."

MPs began hearing submissions at the select committee on Monday, and continue on Thursday.

Craig Walker, who has a Kumeu company relocating 150 houses a year, said moving old houses to make way for new might look like a boon for him, except there were too few sections to move them to.

He hoped the lawmakers would be practical and worried about what intensification meant for access to new developments.

"You can actually see it now under the unitary plan," Walker said.

"You'll get developments with no off-street parking.

"There are streets in Auckland now, we can't get trucks down. I'm not sure how ... rubbish trucks, how furniture trucks, how fire trucks ... get down some of these streets."

That pointed to what Krupp said was still missing - urgent extra government funding for roads and services to cope with extra housing.

"We need urgent, joined-up interventions now. That this [Bill] is an urgent intervention is welcomed, but it definitely needs to be joined up," Krupp said.

The Urban Design Forum suggested the bill could allow for up to 21 apartments, up to four storeys high, on a "quarter acre" section.

"The new bill has no consideration of the urban design matters which we would normally expect to go hand in hand with such an intensification proposal to ensure quality urban places," the forum's submission said.

The bill's intent was good, it just needed amending to make sure some of the extra houses were made more affordable, he said.

Allowing extra houses on a section would increase the land's value, and that value needed to be shared around.

"Government, by making this change, has allowed that land value to increase. And that's going to the owner - nothing that they did has has resulted in that change in value," Glaudel said.

"So Government has enabled it. And we think that it's appropriate that Government is able to retain a bit of that value to meet real community needs."