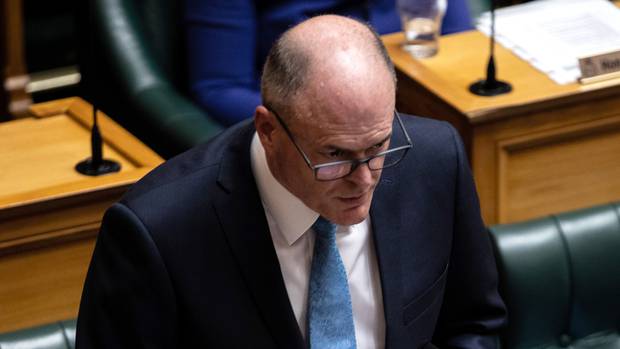 Although Muller's line of questioning was not particularly fiery, an exchange between New Zealand First Minister Shane Jones and National's Paul Goldsmith caused a stir during question time this afternoon.

Muller - who rolled Simon Bridges to become National's leader late last week - focused on small business and jobs over the course of his line of questioning.

"What is the Treasury's most recent estimate of unemployment in the third quarter of this calendar year, and what is the Government's specific plan to arrest the sorts of job losses we've seen over the past two weeks?"

Before answering, Ardern congratulated Muller on becoming the new Opposition leader - but that's where the pleasantries ended.

In response to questions about the plan, Ardern rolled out a familiar phrase - "we've gone hard, and we've gone early" before repeating job statistics unveiled in the Budget.

Muller came at her again – "does she accept that more direct cash support to businesses will help prevent job losses".

Throughout the rest of the question time, Ardern poured cold water on this idea - instead saying her Government's wage subsidy package was doing a lot of heavy lifting when it comes to saving businesses.

A recent survey, Ardern said, revealed that the subsidy scheme has made a difference to the "vast majorly" of businesses being able to retain their staff.

But Muller continued to press her on National's grants scheme - asking why the Government has not provided more direct cash assistance, aside from the wage subsidy scheme.

He got little out of Ardern, who used the questions as an opportunity to tout the Government's Covid-19 relief packages.

After Muller was done, it was finance spokesman Paul Goldsmith's turn.

Moments later, Goldsmith revealed that he was not.

Jones seized upon this gaffe and yelled out "Ngāti Epsom" - making light of the slip-up by joking Epsom, the electorate Goldsmith has run in, was a Māori tribe.

Jones was made to withdraw and apologise, but not before New Zealand First Leader Winston Peters decided to challenge Speaker Trevor Mallard, who wanted to move on from the interjection.

"I think it's a legitimate thing to raise in the House when someone has ignorance to say that someone is Māori and that person himself says he's not.

"I think sorting it out in this House is pretty important."

So funny seeing the opposition complain about the future outlook from the position the country is now in, without acknowledging that had they been running the country it would still be waiting for the peak of the Covid 19 disaster to arrive. The difference between the USA / UK and NZ, is that the right wing pro business at the expense of lives people were not in power in NZ.