No more a dog's life for these pooches 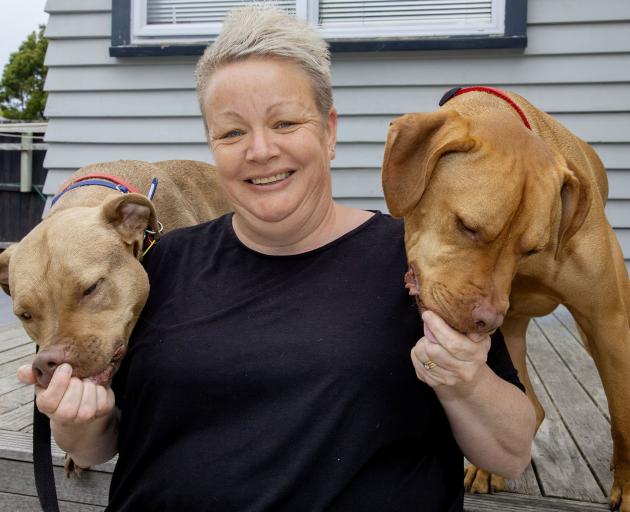 Jen and her dogs Sapphire (left) and Stark. PHOTO: GEOFF SLOAN
For almost three years Sapphire waited at a dog shelter in the hope that someone would take her home.

Luckily for Sapphire, her soon-to-be owner was familiar in dealing with challenging canines.

Jennifer Hooper’s other dog, Stark, was adopted into her family from a chequered, violent past.

Stark arrived at Christchurch Bull Breed Rescue after a vet who was supposed to euthanise him believed he deserved a better life.

After being rescued from a gang house during a police raid in Porirua, Stark was found with cigarette burns on his body and severely damaged ears.

Said Mrs Hooper: “We’ve always had dogs but for better use of a word, we were reasonably snobby about it, we had expensive dogs. We had a bichon frise and a siberian husky.

“But, never again. When you see the difference in rescue dogs, what they bring into your family, we would only go with rescue dogs again in the future.”

Mrs Hooper’s latest challenge was to build a relationship between Sapphire and Stark, so Sapphire could be adopted, almost three years after CBBR picked her up in 2016, when she was 11-months-old.

CBBR founder Abbey van der Plas said little was known about her life before the shelter.

Said Mrs Hooper: “We got Sapphire home after a very long process of training. When I say training, that’s me being trained in how to look after her.”

Sapphire’s ‘quirks’ meant Mrs Hooper visited the shelter weekly for six weeks to become familiar with her, with the help of one of the shelter’s volunteers, Denise Balloch. Public outings were also required to get Sapphire comfortable with being around strangers.

Then later, Mrs Hooper would bring Stark along and eventually they went on ‘doggie dates’ and had ‘doggie sleepovers.’

“I knew it was a massive commitment to take on a dog like that. My work was really flexible and I was able to go in later, so I could be at the shelter. I was at the shelter for about three or four hours per week.

Then later I began picking Sapphire up also, two times a week.’’

After five months of this, Sapphire’s adoption papers were signed, late last month.

She has been living with her new family, Mrs Hooper, her husband and two sons, aged 19 and 21.

“She still sleeps in a crate, for routine. But whoever is up first in the morning will let her out and she will hop into bed with whoever is still sleeping.

“She’s got a lot of quirks but she’s settling in really well,’’ Mrs Hooper said.

A happy ending has come for a heavily pregnant dog found wandering the streets in Papanui.

Lola and her five puppies were surrendered to the care of SPCA and now all but one have now been adopted.

SPCA senior animal welfare inspector Samantha Cairns said Lola was found wandering the streets and was so heavily pregnant, staff were able to see the puppies moving inside her.

“She was very obviously heavily pregnant. We didn’t want her having babies on the street.”

Lola’s owner was found,but it was decided the best for the dog was for her to be surrendered to the care of SPCA.

Now, Lola has been adopted by an SPCA staff member.

“Esta is one of our senior canine animal attendants. She was working with her throughout her journey and fell in love with her and decided to adopt her,” Miss Cairns said.

Her five puppies, four males and one female, all have Lion King-themed names.