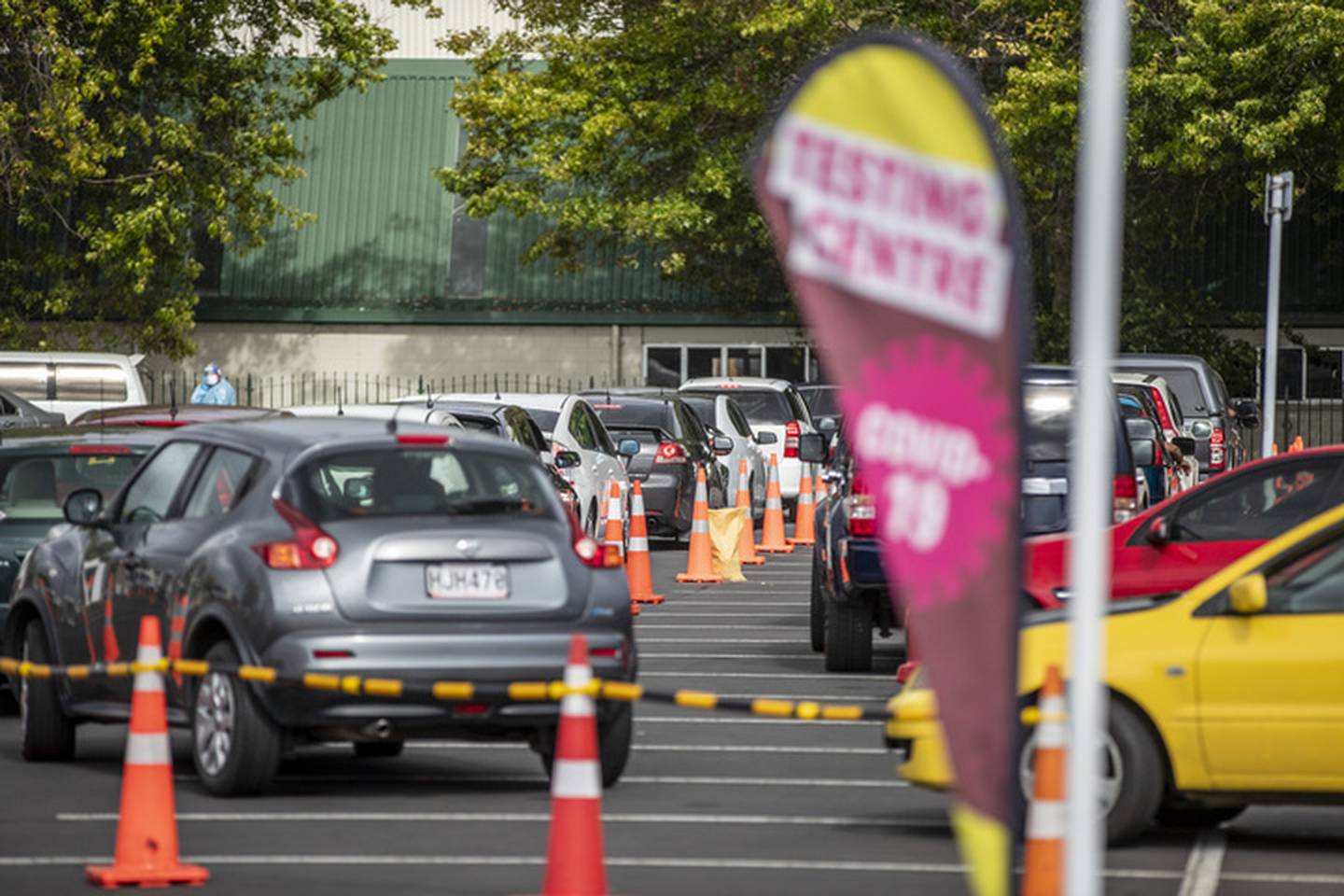 People in about 100 cars were lined up and ready to have their test at the Otara Covid-19 facility in South Auckland this morning. Photo: NZ Herald
There are no new Covid-19 in the community to report today, and one new case in managed isolation.

The latest case in isolation is a person who arrived on February 27 from India via the United Arab Emriates and Singapore. The total number of active cases in New Zealand is 67 and the total number of confirmed cases is 2022.

This morning, Ardern revealed there was a clear chain of transmission to the latest two cases in South Auckland which has put New Zealand's biggest city back into alert level 3 lockdown for a week and the rest of the country into alert level 2.

The latest family infected failed to tell authorities they had contact with another household during the three-day lockdown early in February when they were meant to be isolating.  While infectious, a 21-year-old then visited a number of high-risk environments, including the Manukau Institute of Technology, work and the gym.

Ardern told Newstalk ZB this morning the discovery was only made after several calls to the family by health officials. This now meant there was a direct chain of transmission in the current outbreak. "Obviously we've had contact here in level 3 when it shouldn't have happened."

In a statement this afternoon, the Ministry of Health said the latest community case reported is Case O, which is a household contact of Cases I, J, K and L who are all in Auckland quarantine facility the Jetpark Hotel. Case O was reported on Sunday night.

They were moved to Jetpark as a precaution on February 23 so were in quarantine during their infectious period, meaning no risk of spread in the community.

Case M and N - the 21-year-old who went to the gym after getting tested for Covid and his mother - have also been moved to Jetpark, along with their other household family members.

Contact tracers have identified 21 close contacts from the Manukau Institute of Technology who are being followed up with. Health officials said to check the Ministry's website for the specific times where there could have been exposure to the virus.

"The vast majority of people on the campus at the same times as Case M are considered casual contacts and need to watch for symptoms. They do not need to have a test unless they have symptoms, or are a close or casual plus contact.

"All casual contacts should be limiting their movements and interactions with other people. Under Level 3, everyone in Auckland should also currently be staying at home."

There have also been 154 casual plus contacts identified from the student's visits to City Fitness Manukau and Hunters Plaza. These people need to stay home until they get a negative test result.

The first three cases from the February cluster - cases A, B and C - have recovered and left the quarantine facility.

There is also ongoing wastewater testing happening near Papatoetoe High School in South Auckland, which continues to be negative.

Meanwhile, police have thanked motorists for their patience after more than 25,000 vehicles passed through Auckland checkpoints yesterday. A total of 263 vehicles were turned away between 6am and 3.30pm on Sunday, Inspector John Thornley.

The 1847 people who contacted the ministry as having been at Kmart Botany at the times of interest had been asked to isolate for 14 days and return two tests - at day five and day 12 - after their potential exposure. The ministry said it had 1794 negative tests from the group to date.

Seven close and close-plus contacts were identified as having been at Dark Vapes East Tamaki, and all had returned a negative day-five test, the ministry said.

At Papatoetoe High School, 1514 of the 1519 students and staff had returned at least one negative test result since 15 February, plus the three positive cases (E, I and J), and more than 97 percent of results had been returned for all casual-plus contacts' follow-up tests, the ministry said.

The majority of people who were at Manakau Institute of Technology's Manukau campus at times identified on the Health Ministry's locations of interest page were also considered casual contacts and would need to watch for symptoms but would not need a test unless they had symptoms or were a close or casual-plus contact, the ministry said.

WHAT YOU MUST DO

Close contacts must: Self-isolate for 14 days and get a test.

Casual plus close contacts must: Please stay at home, get tested as soon as possible and call Healthline on 08003585453. Remain at home until you receive a negative test result. Self-monitor for Covid-19 symptoms for 14 days from your exposure. If symptoms develop after your first negative result, get another test immediately and stay at home until a negative test result is received.

Casual contacts: Monitor your health for the next 14 days. If you begin to feel unwell or develop any Covid-19 symptoms, contact Healthline on 0800 358 5454, get tested and stay at home until a negative test result is received.