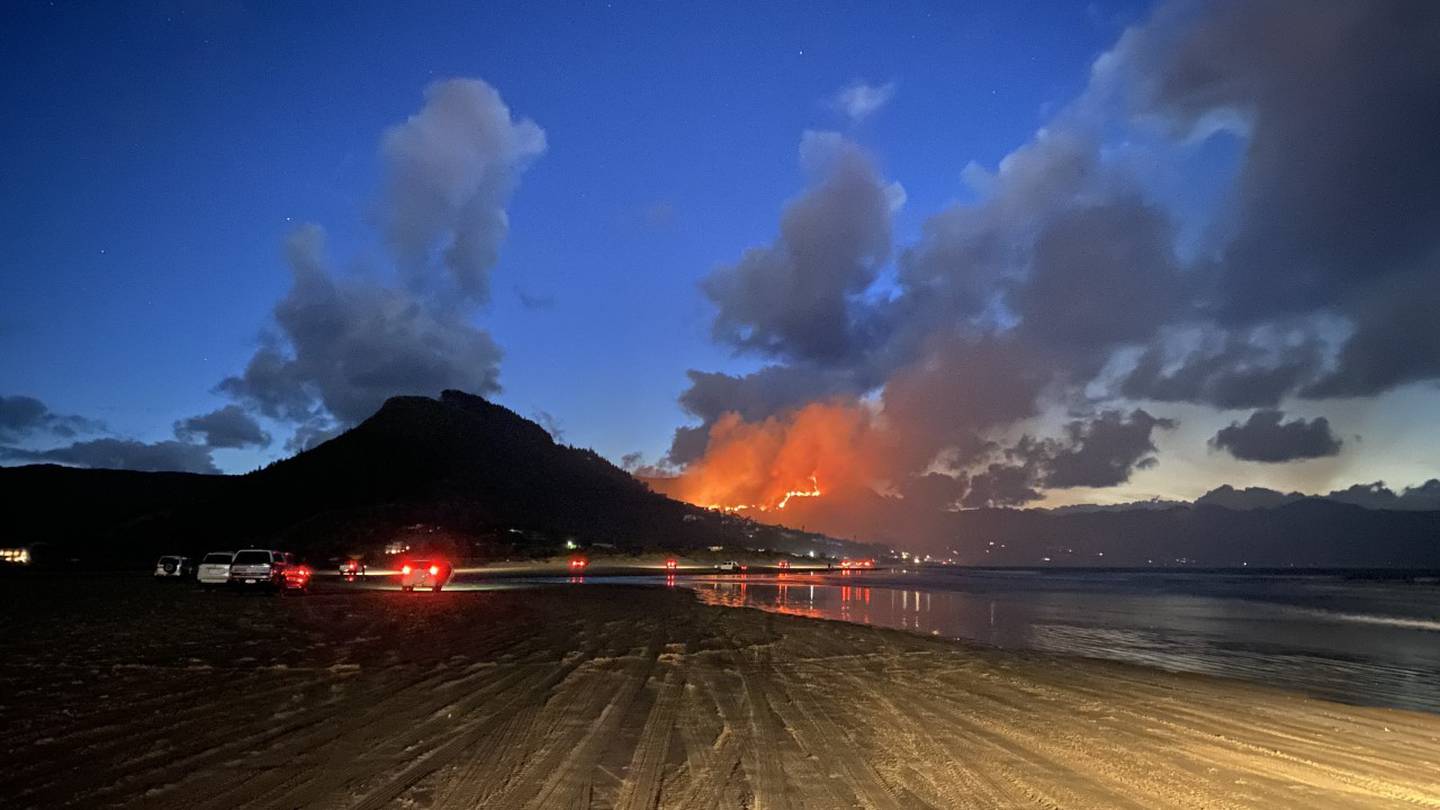 A view of the fire at Ahipara last night. Photo: Chad Cottle via NZ Herald
Far North Mayor John Carter says the fire in Ahipara which forced the evacuation of about 100 houses last night is a warning about just how dry Northland is.

"This is a warning to us. Fortunately we've got away without loss of life, loss of property or injury, but every resident and every visitor to Northland has a responsibility to make sure this sort of thing doesn't happen again. It's a massive warning."

The fire has burnt through 56ha of scrub and native bush.

The number of choppers in use had bern reduced from six to three. Some would remain on standby while others would be released as the day went on.

About 25 people - a mix of FENZ, forestry and DOC crews - were fighting the fire on the ground.

"It's quiet at the moment and we have the upper hand, but the wind will rise later in the day, the temperature will rise and the humidity will drop. That will be against us," said Renwick.

"With the weather forecast, if it does get away we can expect some extreme fire behaviour, which means very high rates of spread and intensities that are difficult to control. In some places we may mot be able to stop it. That's why we have the area cleared of people."

Renwick said he expected firefighters would be "chasing hot spots" for several days.

The cause of the fire was being investigated but if anyone had information about how it started, Renwick urged them to call police on 105 or Fire and Emergency on 09 486 7949.

Six helicopters were up at first light to try and control the blaze, which was burning through a block of land measuring one square kilometre, according to Fenz northern shift manager Kaisey Cook. Forty firefighters were fighting the fire on the ground.

Fresh ground crews were sent in at 8.30am to start the long and dirty job of fully extinguishing the blaze.

A decision about when to allow residents back to their homes is expected later this morning. Foreshore Rd remains closed.

Charred scrub, marking the furthest reach of the fire, descends the hills behind Ahipara to within a few metres of one home off Foreshore Rd. Two other baches had an extremely close call.

According to Carter no properties were thought to have been destroyed overnight and no one was injured.