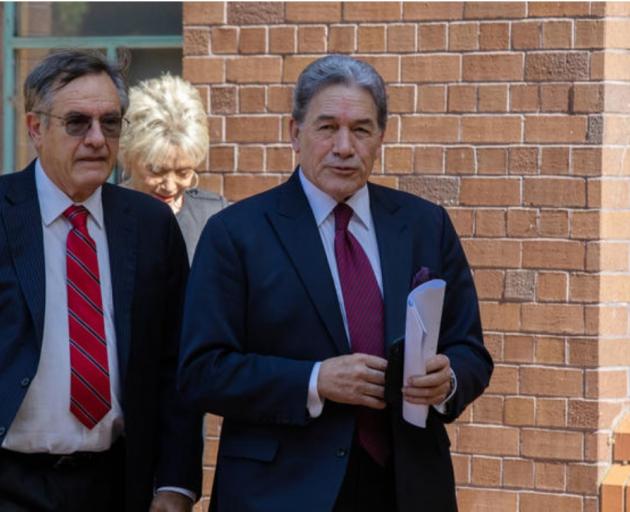 RNZ revealed last week that Future Forest Products spent six months in discussions with government officials over its Provincial Growth Fund and also wanted up to $95m in funding through the One Billion Trees programme.

Brian Henry, lawyer for Winston Peters and judicial officer for the New Zealand First party, is a founding director of NZ Future Forest Products, which he helped to set up in March.

His son, David Henry, is another founding director and the company's managing director, and Winston Peters' partner Jan Trotman was made a director of the company in August.

The Provincial Growth Fund bid was eventually rejected by Labour ministers after Shane Jones recused himself from the process.

In a statement released this afternoon, New Zealand Future Forest Products said it was "aware that two of its directors have personal links to the New Zealand Deputy Prime Minister" and would be maintaining a higher level of transparency than required of it as a private company.

"The company has no further plans to apply for financial support from the New Zealand government," the company said.

The statement follows comments Mr Peters made earlier today, labelling journalists' questions about Future Forest Products "narrow, myopic dirt" and saying the proper process had been followed when the funding bids were made.

Future Forest Products said its application to the $3 billion Provincial Growth Fund - which was negotiated as part of the Labour-New Zealand First coalition agreement - was for a $15 million loan to carry out a feasibility study for a new engineered timber operation in Gisborne.

That bid - which began within days of the company's registration in March - was eventually turned down by Labour ministers at a 7 November meeting.

Mr Jones was at the meeting but excused himself for that agenda item, after receiving Cabinet Office advice that his relationship with Brian Henry posed a potential conflict of interests.

Future Forest Products also wanted up to $95m from the One Billion Trees fund - another programme overseen by Mr Jones - to buy farmland to convert to commercial forestry.

In a presentation sent to senior forestry officials in July, it proposed the government join it in that scheme as a joint shareholder of a company it proposed to set up, Future Forest Products Afforestation Limited.

Today, Future Forest Products said it did not make a formal application to the One Billion Trees fund.

It also announced a new director, the US-based New Zealand businessman Peter Watson, who has worked for both the George HW Bush and Clinton presidencies.

It had finalised an acquisition of Northland timber company North Sawn Lumber, and that company's directors, Garth Mortenson and Grant Syminton, would also be appointed as Future Forest Products directors.

The sole shareholder of Future Forest Products is Kinleith Continuation LP, a limited partnership of which David Henry is the public partner. The limited partner and their investment or shareholding is not publicly available.

In its statement, Future Forest Products said it was "entirely financed by private equity" via Kinleith Continuation but would always be majority New Zealand-owned. Overseas investment would be capped at 24.9 percent, enabling it to make acquisitions without Overseas Investment Office approval.

Today's statement underscored the Henry family's history in the forestry sector, saying its involvement dated back to 1860.

The company's statement was released just a few hours after Winston Peters called journalists' questioning "psycho" and told TVNZ there was nothing for the auditor-general to investigate.

"In the case of myself and Shane Jones - well, I didn't even know about it and nor did Shane Jones to the best of our knowledge, because it was handled by the process," Mr Peters said.

"What on earth would the auditor-general investigate?"

The application was made and went through the process with no involvement from ministers, he said.

"In other words, the system worked - so stop your narrow, myopic dirt where New Zealand First is concerned."

Ms Trotman was "not even part of the business when the application was made or when it was finalised", he said.

Ms Trotman was only made a director of the company after the proposal for One Billion Trees funding was rebuffed by officials.

However, the application for Provincial Growth Fund money was still live at that stage.

A spokesperson for Mr Jones said the material outlining the company's proposal never came to the minister or his office and he was not involved in any decision because it was rejected by officials before reaching him.