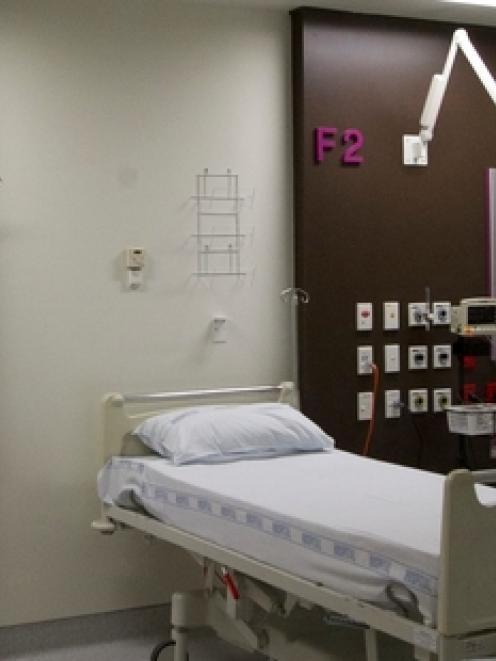 Middlemore's Ebola unit has three zones. Photo by NZ Herald.
Middlemore Hospital has set up a bio-containment unit in response to the global Ebola scare, even though specialists say New Zealand is at little risk of infected patients arriving.

The unit, staffed by infectious disease specialists, has two negative-pressure rooms that can accommodate up to four patients.

It will be monitored by the infection protection and control team and nursing staff, with no other traffic in or out of the unit, Middlemore manager Dot McKeen said.

Visiting specialists would use an intercom to speak to staff or patients.

Mrs McKeen said staff were trained in the "donning and doffing" (putting on and taking off) of personal protection equipment.

The unit has three colour-coded zones.

The two areas are separated by an "orange zone".

Prime Minister John Key said yesterday that the likelihood of the Ebola virus reaching NZ remained low but "you have seen a situation where at least potential cases have gone to Australia, so you can see that we're not completely immune from that".

Appropriate checks were in place at airports "but if we start getting to the point where we feel as though there's not enough being done, then again we'll consider that matter".

Mr Key said the Government was taking a number of precautions to prepare for any suspected cases here, including the Middlemore unit.

Dr Julia Peters, clinical director of the Auckland Regional Public Health Service, said a team of six to eight people had been planning a response to a possible Ebola outbreak in New Zealand for the past six weeks.

"Middlemore and Auckland are both tertiary-level hospitals where a suspected Ebola patient would be investigated and treated."

She said part of what the Public Health Service did was deal with emergent health issues.

"We are prepared to scale up as it is required."

He blamed the severity of the African outbreak on poor health infrastructure.

Health Minister Jonathan Coleman said health and border authorities were well prepared to detect and respond to any potential cases of Ebola.

"We are treating the situation very seriously. While the risk to New Zealand remains low, we cannot guarantee that we won't get a case here."

"It is quite possible that someone who has arrived here having travelled from a West African country affected by the Ebola outbreak will at some stage exhibit symptoms that need to be investigated.

"If they develop a fever within days of arrival we would have to rule out Ebola. It is far more likely these cases would turn out to be other illnesses like the recent cases in Australia."

Dr Coleman said while the risk was low, the Ministry of Health was taking every precaution to keep New Zealand protected

"Ebola is not easy to catch. It is not spread through the air, and infection requires contact with infected bodily fluids. Existing isolation facilities and infection control protocols in our hospitals are suitable for treating a suspected or confirmed case of Ebola. "Local and international expert advice is that Ebola would be well contained in countries like New Zealand," he said.

Any traveller who feels unwell after returning home is encouraged to call Healthline on 0800611116 or phone their GP or hospital prior to visiting and tell them where they have been travelling.