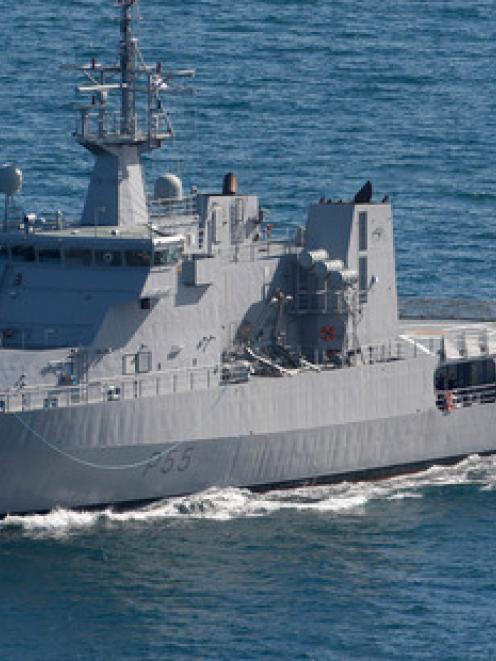 HMNZS Wellington. Photo: NZ Herald.
The Royal New Zealand Navy is in a standoff with two fishing vessels in the Southern Ocean after the ships refused to let defence officials on board.

The HMNZS Wellington was given permission overnight to board the vessels, which were flagged to Equatorial Guinea and were not legally permitted to fish in the region.

But attempts to board two of the ships and inspect their catch have so far failed.

Foreign Minister Murray McCully said: "The HMNZS Wellington attempted to exercise its legitimate right to board the Yongding and the Songhua earlier today, but the vessels refused to cooperate.

"Due to the conditions and the evasive tactics of the masters it was not possible to safely board these vessels."

He said the safety of the Wellington's crew was the most important consideration.

Some evidence of illegal fishing of toothfish had already been collected by the navy.

Equatorial Guinea told New Zealand officials that they believed the vessels were fishing illegally and agreed that the navy should board the ships and verify their flag status.

New Zealand was also working with Interpol to prevent the catch from being offloaded at nearby ports, and was co-operating with Spanish authorities to investigate the links between the ships and a Spanish-based syndicate called Vidal Armadores SA.

The Southern Ocean fishery, which contains sensitive toothfish and krill populations, is tightly regulated and cannot be fished by countries which do not belong to the 25-member Conservation of Antarctic Marine Living Resources (CCAMLR).