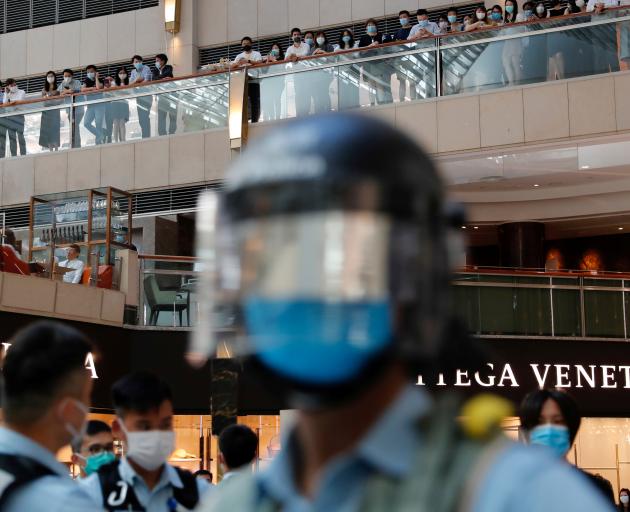 Riot police patrol at a shopping mall during a protest after China's parliament passes a national security law for Hong Kong. Photo: Reuters
The New Zealand Government is "reviewing the settings of its relationship" with Hong Kong, the Foreign Affairs Minister has announced.

It follows the introduction of a national security law by Beijing that criminalises forms of political protest with penalties including life imprisonment.

"New Zealand remains deeply concerned at the imposition of this legislation on Hong Kong.

"Accordingly, the government has directed officials to review all of New Zealand's policy settings with respect to Hong Kong to determine the appropriate nature of our cooperation going forward.

"This will be a deliberate, considered review across all of our settings, including extradition arrangements, controls on exports of strategic goods, and travel advice.

"New Zealand shares the international community's significant and longstanding stake in Hong Kong's prosperity and stability. We will continue to monitor the law's impact on the people of Hong Kong, with whom we share close links," said Peters.

"This legislation could be interpreted broadly, leading to increased risk of arrest and prosecution on national security grounds for a wide range of activity, including protest activity," the SafeTravel website said.

It coincides with the Australian government's advisory to its citizens in Hong Kong, warning Australians who visit the city "may be at increased risk of detention on vaguely defined national security grounds".

The Department of Foreign Affairs and Trade was already advising travellers not to travel to China - or anywhere overseas - because of the coronavirus pandemic.

The news from across the Tasman comes after a Canadian government official told Reuters that foreign ministers from the Five Eyes group discussed the situation in Hong Kong during a conference call.

Separately, Canada's Foreign Minister Francois-Philippe Champagne tweeted that he discussed with his counterparts from the other countries many issues regarding international peace and security.

The Morrison government will establish an incentive programme for Hong Kong businesses to relocate to Australia, with pathways to permanent residency for their staff.

Australia has also suspended an extradition treaty with Hong Kong.

Australia has decided against opening up a new humanitarian intake for Hong Kong residents who fear persecution under the laws. Instead, it will focus on students and temporary visa holders - primarily those who are already in Australia.

There are currently 8200 students, 900 graduates and 570 temporary skilled visa holders in Australia from Hong Kong.

Another 2300 Hong Kong students, 130 graduates and 100 temporary skilled workers outside Australia, for reasons such as visiting family or holidays, have Australian visas.

Under changes outlined on Thursday, students from Hong Kong will be eligible for a five-year temporary graduate visa once they conclude their courses, along with a pathway to permanent residency.

Former students still in Australia will be given another five years as well.

Temporary visa holders from Hong Kong will be offered an extra five years in the country and a pathway to citizenship.

Future applicants for temporary skilled visas will be able to come for five years.