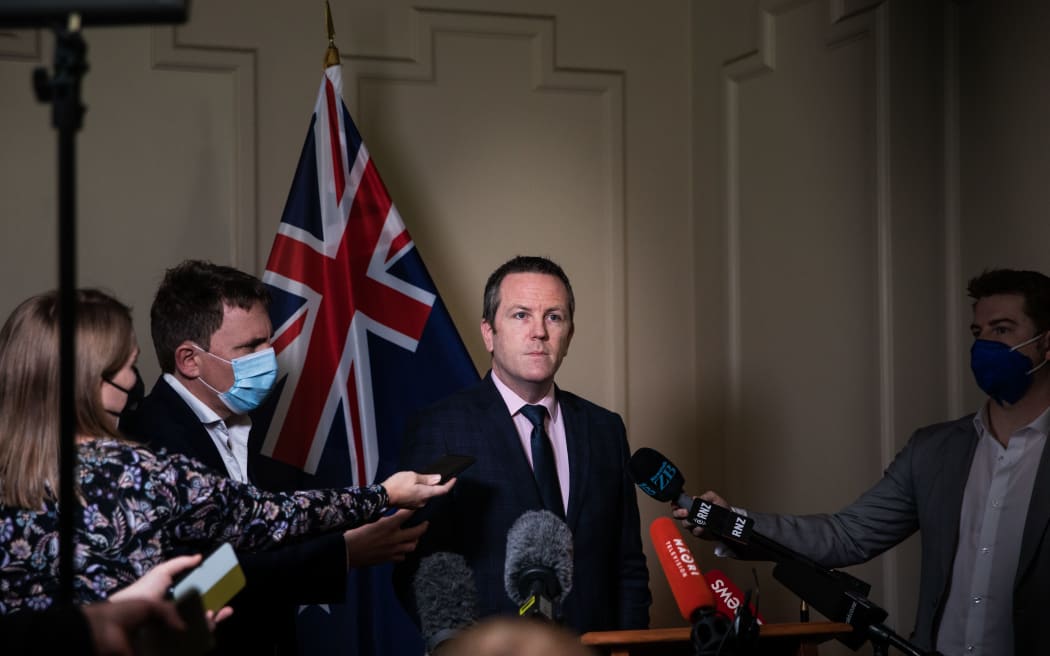 Simon O'Connor. Photo: RNZ
National MP Simon O'Connor has returned to Parliament with an apology to colleagues over a social media post that celebrated the US Supreme Court's overturning of abortion law.

Speaking to media ahead of this week's caucus meeting this morning, he said he recognised the need to remove the post before being spoken to by leader Christopher Luxon, and it was no gag order.

"I have not been gagged," he said. "I am a great advocate for free speech but all rights have limits and in this case the nature of the comments - the distress, the hurt - this has to stop and I can't be facilitating it."

"We had a discussion ... I offered [to take the post down] first because ... actually it was really spiralling."

The comments on his post had become toxic and unhealthy, he said, and the hours-long delay in removing the post was because he had been busy.

"This is going to sound ridiculous, I was actually busy waterblasting down the way and I didn't have my phone on me."

He acknowledged the post as a misstep, saying he clearly had not put enough thought into it and he would be apologising to his fellow National MPs.

"One of the great things about the National Party is we can talk freely, and colleagues have told me they're upset and I acknowledge that ... National's always had a broad range of views and I'm incredibly comfortable with that."

Some constituents have called for O'Connor's removal from his seat over the matter, but leader Christopher Luxon said he stood by him. He said he supported his entire caucus and the candidate selection would be undertaken as normal ahead of the next election.

"That's going to be a decision ultimately for the National Party in Tāmaki, we will kick off selection processes in the back half of this year ... each electorate gets to choose its candidates and go through selection processes."

He said the problem with O'Connor's post was the way it was being interpreted.

"It wasn't the National Party view but it was being interpreted that way - and so it was a very simple, very quick and very constructive conversation." 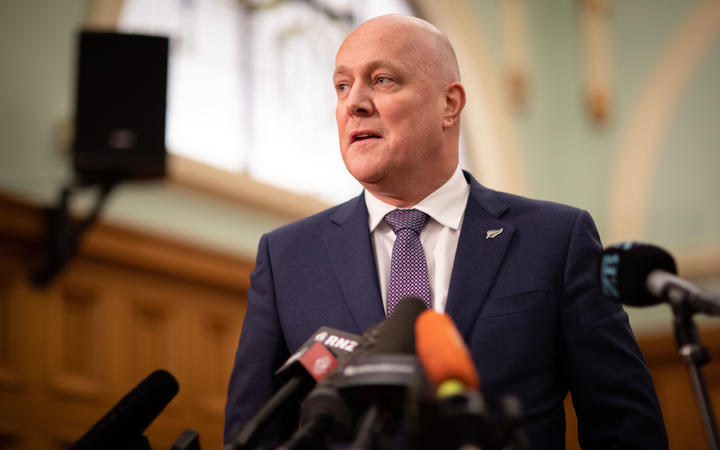 National Party leader Christopher Luxon Photo: RNZ
Luxon is open about his personal pro-life views, but has repeatedly made clear it would not impact his party's position.

"Our abortion laws are settled. We had the debate, we had the discussion. We voted on them, we settled them and they should be respected and upheld and we're not relitigating or revisiting our abortion laws."

He promised over the weekend abortion laws would not be revisited under a future National government, and related health services would remain fully funded.

Deputy leader Nicola Willis takes a pro-choice stance on the issue and said she was "gutted" for America after the Supreme Court's ruling. What really mattered here, however, was abortion laws would not be subject to change, she said.

"I trust New Zealanders to see through the argy-bargy and the politics and to go to the heart of the matter where I think we're in a good position."

The party's spokesperson for women, Nicola Grigg, had much the same view, and rejected the accusation National MPs would individually put forward members' bills on the issue.

"They'd have to bring a bill to our caucus and our caucus would discuss it and vote accordingly - but likewise a Labour MP or a Greens MP or a Māori Party MP could bring a bill forward."

She also poured cold water on the suggestion MPs were being gagged.

"We don't have a bill in front of us, we haven't been whipped ... we're not being told what to say.

"Equally, it's not just within the National Party that there is a variety of views."

That was also true of Labour, which also took a conscience-vote approach to voting on the removal of abortion from the Crimes Act.

Foreign Minister Nanaia Mahuta - who is currently overseas - has been criticised for tweeting opposition to the US legal ruling despite having voted against the government's 2020 decriminalisation bill.

Fellow Labour MP Meka Whaitiri had also voted against the legislation, but today explained her position was more nuanced, and she was happy with the government decision not to relitigate it. 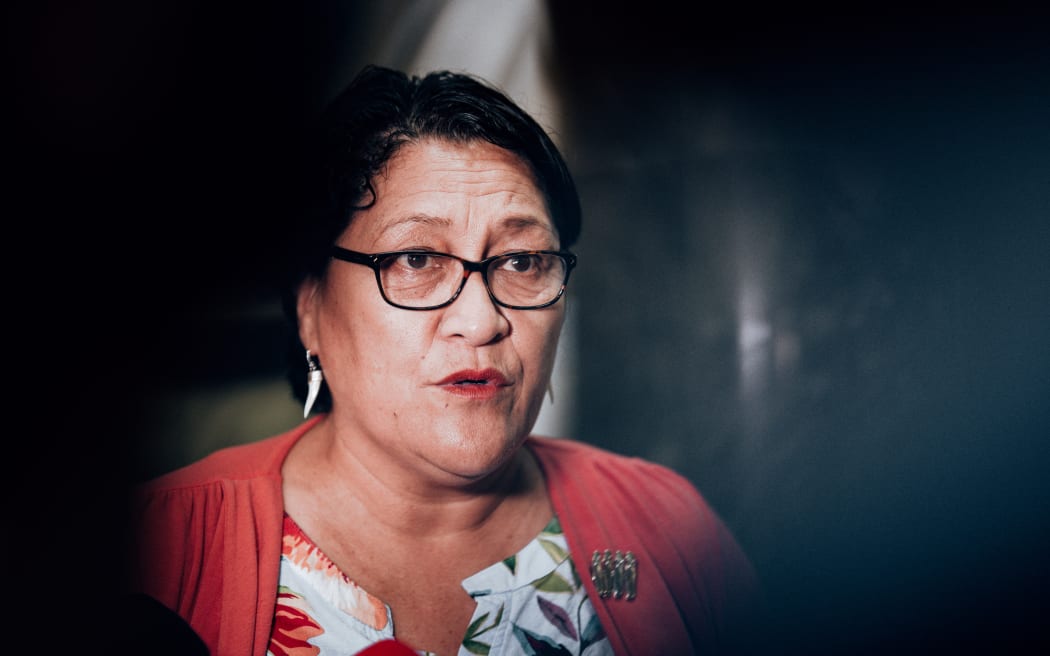 Meka Whaitiri. Photo: RNZ
"Absolutely ... like I said, support women's choice, it's a health matter, that's why we took it out of the Crimes Act. I just was very clear on why I voted against it - for cultural considerations and maintaining our whakapapa in this country."

Her vote against the legislation was for cultural reasons, she said.

"I met with Māori women in my electorate ... for me it's a cultural issue around whakapapa, of keeping the numbers of Māori alive and also the practice of aborting children wasn't well understood in Māori circles."

List MP Anahila Kanongata'a-Suisuiki also opposed the decriminalisation of abortion - and remained opposed - but was also comfortable with how the matter had played out.

Others in Labour were not opposed to the principle of abortion, but at the time had particular concerns about the 2020 legislation.

Incoming Speaker of the House Adrian Rurawhe said he had concerns about the limits for late-term abortions.

"I felt the limit at 20 weeks should have been a lot stronger ... If it had been the way it was described at the time when it was first mooted ... I would have been okay with it."

Greg O'Connor said he had also wanted a higher threshold of tests for abortions after 20 weeks.

"I personally voted against the bill last year on a very narrow basis ... I've got an intellectually disabled son, and I put an SOP (Supplementary Order Paper) in, I called it the Michael clause after him.

"As far as the broad issue of abortion [it's] settled law in New Zealand. If it were to come up as a broad issue I would vote for it."

Labour's MP for Te Tai Tonga, Rino Tirikatene, said his own position on the matter was very personal.

"My mum was advised by her doctor to have an abortion when she was carrying me so it was a very personal issue."

It was similarly personal for his Hamilton East colleague Jamie Strange.

"I didn't actually know that was Rino's situation, but my mother was also advised to have an abortion back in 1975 - she didn't, I'm here today for that reason," Strange said. "It's certainly multifaceted and I think we would both acknowledge that it is a very complex issue."

Both said they felt able to express their views.

However, Michael Wood was at pains to separate matters of church and state.

"For individuals who carry a faith with them and or deep beliefs, it's entirely appropriate or reasonable that we consider those when we're making important decisions in our roles ... [but] it seems to me to be a concern when public institutions end up acting in a way that's more theocratic than democratic."