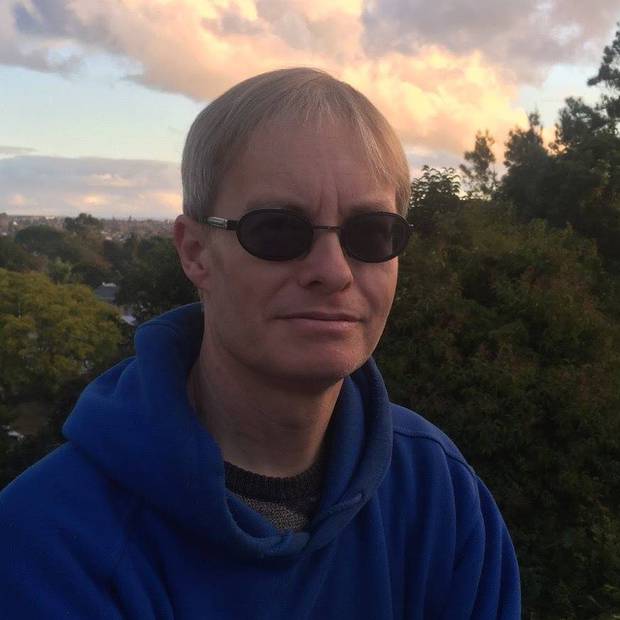 Property owner Mark Philip was warned twice by police he was in breach of lockdown restrictions. Photo:Supplied
A landlord escorted off an already-occupied property during the Covid-19 lockdown in handcuffs by police, immediately went around the corner and tried to gain entry to another of his flats, the New Zealand Herald can reveal today.

Landlord Mark David Philip, who is now staying in a taxpayer-funded lockdown hotel, had repeatedly tried to move into one of his Mt Eden rental properties on day one of the national coronavirus level 4 lockdown, insisting it was his permanent residence.

But his stunned tenants phoned the police, saying he'd turned up uninvited and without notice.

On a third occasion, they say he gained access by dashing inside when they went to see who was knocking at the door.

The five housemates who are renting the four-bedroom villa now say they feel unsafe after their landlord's unannounced lockdown intrusions and have fashioned internal locks and devised a secret knocking system for added security.

"There's nothing normal about this situation," said Rachel, one of the housemates, who is an essential worker in the coronavirus pandemic response.

Philip, who is listed as living at the property in the 2017 electoral roll, says it's his main residence - despite spending most of last year overseas.

When police officers showed up, he claimed that he was simply following Prime Minister Jacinda Ardern's advice by going home to the property he owns to stay in his bubble.

They marched him away from the property and warned him to stay away.

But Philip claims it was the police officers who suggested he should go to another of his properties.

"That's what police told me to do, I couldn't believe it. Take me out of one bubble and shove me into another one," Philip told the Herald yesterday.

"When they kicked me of my house, I said where am I supposed to go? They said, 'Go to your other house'. I said, 'Why are you taking me out of this … I don't even have a room there… This is why I've chosen to be in [the first flat], because I have an empty room there and that's where I was going to be for the next four weeks'. They took me out of it and said, 'Go to your other place'. Well, you've got to be kidding me."

He claims that when he went to his other rental property just minutes away, he had no intention of staying there.

Philip says he just picked up some personal items and left.

"That's it. I'm not going to sleep on the couch for a month, are you dreaming?" he said.

Source: NZ Herald
But the Herald has been told by tenants that he "repeatedly" tried to gain access to the second property.

They say he went there twice on Thursday, March 26 - day one of the lockdown – and once the next day.

Tenants made it "very clear each time that he was not welcome to come in and was breaching lockdown".

Police were informed and officers advised them to call 111 if Philip returned.

"It was obviously a very concerning situation as two of us in the house are essential services so these breaches were putting us at risk as well as everyone we work with," one tenant told the Herald.

When approached for comment, a police spokeswoman said they couldn't confirm whether or not an individual has made a complaint to police "or whether an individual has been or is under investigation, for privacy reasons".

Yesterday in a statement, police confirmed they were called to the first house twice on the first day of the lockdown "after threats had reportedly been made by one party at the location".

"One of those present at the address, a man, was noted to be in breach of the alert level 4 restrictions and was asked to leave the address," police said.

Police confirmed they were called back later that day, when the man breached lockdown restrictions again.

"These requirements have been explained to him, and advice offered before he left the address."

Philip, who said he plans to file a complaint with the Independent Police Conduct Authority, is also embroiled in ongoing Tenancy Tribunal proceedings with some tenants of the first Mt Eden property.

And now the Herald can reveal that just last year, Philip was reprimanded by the Tenancy Tribunal for breaching a number of provisions in the act – relating to another property that he owns just around the corner. It included failing to comply with smoke alarm requirements, lodge bond, provide an insulation statement, or provide documents.

The Tenancy Tribunal found Philip – who it was noted was often overseas for extended periods and wouldn't put in place appropriate arrangements for landlord duties in his absence - was "patently unaware of his obligations as a landlord".

Philip denies any wrongdoing and today said he was challenging that decision and awaiting a rehearing date.

In its July 23, 2019 decision, the tribunal ruled that Philip must immediately pay a tenant $2000 in exemplary damages.

Philip had found parts of the tribunal hearing "funny" and failed to understand its seriousness.

"I have no confidence from Mr Philip's evidence today that he has even a minimal understanding of his obligations as a landlord," the tribunal said in its decision.

"Such orders are not made lightly as a further breach may result in a conviction, which is far more serious than an award of exemplary damages."

The tribunal also restrained Philip for a further two years "from committing a further act of the same kind for which exemplary damages have been awarded".

"It is hoped that Mr Philip will take note of the matters raised in the hearing and address these immediately if he intends to self-manage the tenancy, or consider appointing an experienced agent to manage it for him."

"We all need to try our best in this situation and hopefully we can get back to normal as quickly as possible," she said.