Otago researchers outline how NZ can beef up its border 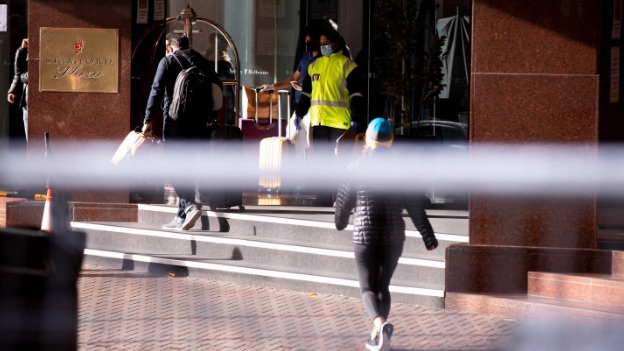 In a blog post published today, a team of Otago University researchers argued New Zealand still didn't have optimal control of its borders against Covid-19, and set out five ways to combat further leaks - including offering vaccinations to arriving travellers.

Their analysis found that, since last July, there had been 13 identified border failures, along with six failures that had occurred within managed isolation and quarantine (MIQ) facilities.

The largest resulted in the Auckland August cluster, involving 179 cases and three deaths - and was one of two failures that forced the city into lockdown on three occasions.

The researchers cited official estimates that put the daily cost of Auckland lockdowns at up to $75 million in GDP, along with the loss of 250 jobs.

Overall, however, they said New Zealand had done "very well" with its pandemic response, which ranked among the world's best.

While a vaccine roll-out that began with border workers was a welcome development, they said the "green zone" of quarantine-free travel New Zealand was about to form with Australia would bring more challenges.

"This green zone means that our biosecurity status will become more intertwined with Australia," they said.

"Therefore, it is even more important to lower the risk of border failures that could disrupt green zone travel, especially if outbreaks are not initially well contained.

"This situation gives us the opportunity to benchmark our current measures with those used by the eight states and territories in Australia."

Among five steps they recommended was slashing the number of infected travellers arriving into MIQ facilities - something that would mean accepting fewer arrivals from "red zone" countries like the US, UK and India, along with extra measures like predeparture testing.

All returnees could also be offered vaccinations on arrival.

"Even though this will offer only partial immunity while in MIQ, this measure might still be worthwhile."

They again made a case for only using MIQ facilities in large cities for the lowest-risk travellers - such as those from Australia until the bubble opened - and exploring purpose-built facilities away from urban centres.

As well, they said all shared MIQ areas, like those used for exercise and smoking, be eliminated, with a requirement for returnees to stay in their rooms as happened in Australia.

"There should be practical support for returnees who wish to exercise in their rooms, and smokers should be offered nicotine replacement therapy and other smoking cessation treatments and support."

Finally, they called for mandating daily PCR-based testing of saliva for MIQ workers.

"This option could also be explored for travellers in MIQ in addition to the current testing regimen to allow for comparative assessments," they said.

"This testing is being used in parts of Australia and in other countries."

The researchers further suggested New Zealand should aim to have a "failure rate" that compared to Australia.

"As of March 29, New Zealand's MIQ system has a seven-day rolling average of four new positive cases per day - indicating that the risk of transmission within MIQ may still be substantial," they said.

"To ensure the success of the forthcoming quarantine-free green zone between New Zealand and Australia, more preventive interventions are needed to reduce the frequency of such failures.

"Conducting a benchmarking exercise of MIQ and wider border management measures in Australian states and territories could identify potential improvements in policies and practices in both countries."

Yesterday, Prime Minister Jacinda Ardern - who is set to announce a start date for the bubble next week - said arrangements with Australia were still being worked through.

While she didn't share any specifics about criteria for closing borders in a given outbreak, Ardern pointed to the importance of giving travellers predictability.

That included letting them know how prepared they'd need to be, in the event they had to stay where they were if there was a border closure.

She also gave some indications about how New Zealand might interact with separate states.

"Yes, there is absolutely a chance that if a state has an outbreak, if we're confident that border controls are in place, we could turn off that state, whilst continuing travel elsewhere."