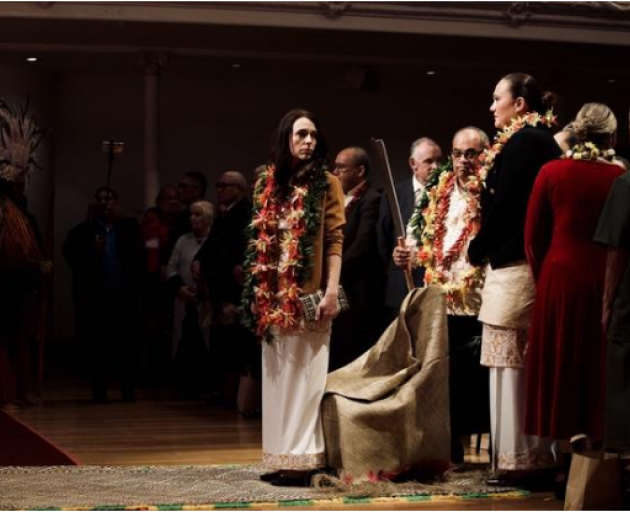 Prime Minister Jacinda Ardern, pictured last year, as part of the Government's formal apology for the Dawn Raids.
The Pacific's $196 million package in this year's Budget includes a big chunk set to help deliver a proper historical account of the infamous Dawn Raids.

One of the standout announcements is $13.7 million to implement the Government's commitment to deliver a historical account on the immigration raids of the mid-1970s.

Police at the time were known for carrying out raids on Polynesian and other Pacific families suspected to be overstayers. The raids were usually carried out in the early hours of the morning - resulting in them being referred to as dawn raids.

Many Pacific families in New Zealand, particularly in Auckland, were impacted at the time; with Minister Aupito himself calling it a "traumatising" experience for his own aiga.

Last year, the Government made a formal apology that saw Prime Minister Jacinda Ardern being draped with a fine mat - carrying out the act of ifoga, the traditional Samoan apology.

"The Government is committed to delivering on its Dawn Raids apology package in this Budget as well," Aupito said.

"The package will give greater public understanding of what Dawn Raids means to our nation and to enable the Teu le Va - to help restore harmonious relationship of mana and dignity and empower our young people especially to be resilient, confident and vibrant."

The money will go towards the Teu le Va Community Fund for community-led multimedia history projects that help capture a historical account of what happened during that time.

The fund is part of a reconciliation process and will see people being able to share stories of their experiences during the Dawn Raids.

The is to generate, preserve, raise awareness and pass on knowledge of this time in New Zealand's history.

The money will also be used for initiatives to produce a historical account report - led by the Ministry for Pacific Peoples - as well as a fund for Pasifika artists and historians to complete professional arts and history projects and an online Pacific histories platform.

"Pacific peoples signalled that they are seeking meaningful commitment to the Dawn Raids apology; which allows us as a nation to move forward together with alofa (love) and fa'aaloalo (respect)."