Peters pushes back at heckler 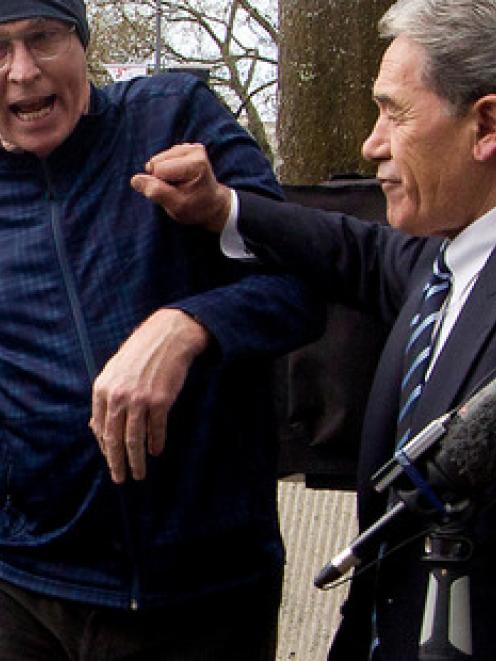 Mr Peters addressed a small crowd at Garden Place in Hamilton today where he was confronted by a heckler who called him a "con man" and asked him what he had been doing for the past three years.

The man then tried to take over proceedings when Mr Peters pushed him away and said "they've come to listen to me, not you".

A man within the crowd confronted the heckler and moved him on when the person said "so, Mr Peters are you going to get one of your thugs to assault me?" before being booed off the stage by those gathered.

The heckler shouted the nazi slogan "Sieg Heil" before running off.

"It's pretty low, not the book....this book is after all the record of the National Party's communications and they can't deny it. It shows it is down and dirty."

"Nobody minds hard politics, that's the name of the business but filth and dirt and sleaze and underhand activities should not be attributable."

Asked what Prime Minister John Key should do given the allegations squared at the National Party within the book, Mr Peters replied: "You will have to ask him but I hope he doesn't say that he didn't know what the SIS and others were doing."

"The SIS declassifying documentation with all the speed in the world, when you all know as journalists and politicians they keep it for the maximum time and sometimes for the maximum of 40 days and this being done in a matter of days goes right to the core of wrongful involvement of a security service in politics, it's just not acceptable."

Mr Peters said dirty campaigning had been building for a while in New Zealand politics.

"What you have got is the very adverse influence of huge money and American-style politics where the leader is being painted as someone you can trust but below him with his knowledge there's every dirty tactic going down and they shouldn't get away with it."

Mr Peters said the book couldn't have come at a better time.

"This is an election about the transparency of both politics, principles and personalities."

"What do you want in a campaign? Not to know or get the inside information on a party this time that has been exposed?"

"The fact is this is the National Party's story collated to their great embarrassment, in one book."

Mr Peters said despite Mr Hager being dismissed by National Party figures as a "left-wing conspiracy theorist" he believed the author had integrity, despite having never met him.

"The Prime Minister and Mr Joyce can go and make those statements but it just doesn't wash and you know why? They're their words, not mine."

Mr Peters said he had lodged a complaint with ministerial services over revelations made about himself in the book.

"I want to know how taxpayers' money was used in that illegal way."

"It's clear as daylight from those communications someone was being employed in the Prime Minister's office not to do a ministerial job but to get dirt and spray dirt around about opponents."