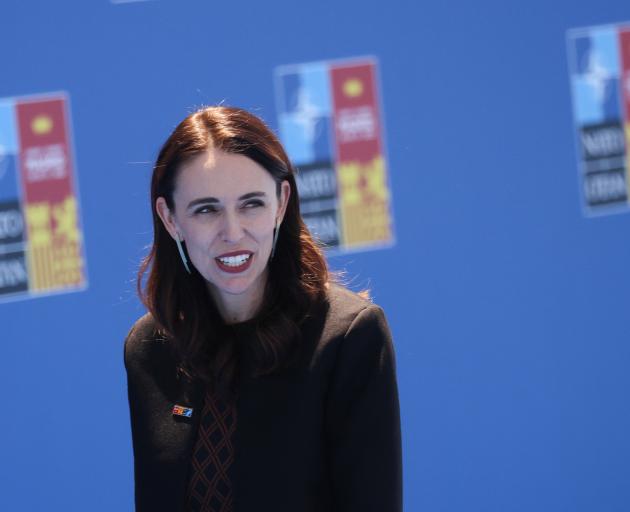 Jacinda Ardern made a plea for diplomacy, de-escalation, peace and stability, adding that on those terms "like-minded partners" would be welcomed to the Pacific. Photo: Reuters
Prime Minister Jacinda Ardern has used her speech to NATO leaders to push this country's "fiercely held" independent foreign policy while also condemning Russia's actions in Ukraine as an affront to the world.

Ardern is participating in a session with the alliance's Indo-Pacific partners and has been speaking directly to world leaders at the summit being held in the Spanish capital, Madrid.

New Zealand is not a member of NATO but was invited by the alliance's secretary general to demonstrate its "close partnership" with countries in the Pacific region.

In a speech delivered overnight, she said while New Zealand had worked alongside NATO countries in Afghanistan and been partners for a decade, the invitation marked a special moment for the nation.

"New Zealand is not here to expand our military alliances. We are here to contribute to a world that lessens the need for anyone to call on them," Ardern said.

"Aotearoa New Zealand has a fiercely held independent foreign policy. We are also one of the oldest and most stable liberal democracies."

The undermining of people's humanity was the driving force to any foreign policy interventions the New Zealand Government chose to make rather than political ideology.

"And on that basis, we are unequivocal. The war in Ukraine is wrong," the prime minister said.

"Russia's actions are an affront to all of us. Not because this conflict should be characterised as a war of the west versus Russia, or even democracy versus autocracy, it is neither. Rather it's a war of Russia versus all those who hold a basic sense of humanity and chose to act on it."

She also accused Russia of being "morally bankrupt" for using its position on the UN Security Council to block debate about its war on Ukraine.

"And [that] demonstrates why we must continue to seek reform of the UN."

After reminding NATO leaders of New Zealand's contribution including implementing unilateral sanctions against Russia for the first time ever, providing humanitarian assistance, military and non-military aid, she made an appeal.

"That we do not allow the legacy of the war in Ukraine to become an arms race, or an even more polarised and dangerous world.

"Our solidarity with Ukraine must be matched by an equal commitment to strengthen international institutions, multilateral forums, and disarmament."

She reminded her audience of New Zealand's longstanding nuclear free status and said the world now stood at a crossroads, which "should be the basis for us to put a halt in the production of weapons that create our mutually assured destruction, because the alternative is unfathomable".

"And so, as the Nuclear Non-Proliferation Treaty convenes for its tenth review conference in August, I hope all members agree to send a strong message. Because if not now, when the threat is even greater, then when?"

NATO set its strategy for the next decade at the summit, defining the security challenges it expected to face and what the alliance would do to address them.

Unlike the previous strategy confirmed in 2010, the newly-agreed strategy mentioned China and its influence on the global security picture.

It also included a commitment to strengthen ties with partners in the Indo-Pacific to tackle cross-regional challenges and shared security interests.

Stoltenberg told the summit China did not share NATO's values.

"Like Russia, it [China] seeks to undermine the international rules-based order. So, we must continue to stand together and work with like-minded partners around the world to protect our values and our freedom and to promote peace and prosperity."

Ardern, after accusing Russia of spreading disinformation and misinformation even as far as the Pacific region, singled out in her speech China's actions as a cause for concern.

"Here, we must respond to the actions we see. We must stand firm on the rules-based order, call for diplomatic engagement and speak out against human rights abuses at all times when and where we see them.

The prime minister also made a plea for diplomacy, de-escalation, peace and stability, adding that on those terms "like-minded partners" would be welcomed to the Pacific.

She concluded by stressing that the major security challenge for the Pacific remained climate change.

"Already in the Pacific, sea level rise is having an impact. There are more frequent natural disasters, impacting on livelihoods through food insecurity, and even greater hardship. We all have a responsibility to address these problems."

Ardern expressed a desire to work further with NATO leaders on the issue which was the most universal threat facing the world, she said.

The challenges we face are truly global. We must continue to stand together with like-minded partners around the world to protect our values, our freedom and promote peace and prosperity. #NATOSummit pic.twitter.com/kkAyGKFyoP

Australian Prime Minister Anthony Albanese said at the start of the meeting "events in Europe have real and significant implications for our own region in the Indo-Pacific, just as the actions in the Indo-Pacific effect European nations."

Ardern also met with the new German Chancellor Olaf Scholz and the prime ministers of the Netherlands, Mark Rutte and Italy, Mario Draghi.

Trade negotiations between the European Union and New Zealand were on the agenda.

"We need advocacy, because we do have some areas that continue to be niggly for a small number of economies and we need those who support us, and there are many, to help support us get it over the line."

Ardern departed the summit for Brussels, as trade talks enter a critical stage, and will meet with the President of the European Commission Ursula von der Leyen.

Ardern said reaching an agreement with the EU in Brussels iwa not a given, and to "watch this space".