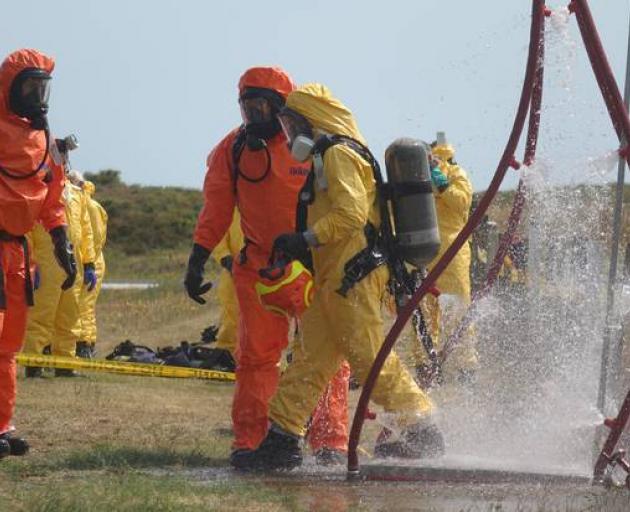 Recovery teams go through the decontamination process after returning from Whakaari/ White Island yesterday. Photo: NZ Police
New Zealand will pause for a minute's silence at 2.11pm on Monday, exactly a week after Whakaari erupted.

The death toll from the volcano, also known as White Island, currently stands at 16, while two bodies remain unaccounted for.

Police had hoped to re-enter the nearby waters to continue the search for those two bodies - at least one of whom is understood to belong to an Australian - on Monday.

That now appears unlikely as conditions prove too challenging for the dive squad to access the site.

Nearby Whakatane is set to be drenched with 20mm of rain over the next 24 hours, with accompanying wind.

Prime Minister Jacinda Ardern will lead the minute's silence - which she has invited Australians to participate in - from the cabinet table.

Ardern penned a solemn note on Instagram on Monday morning after the dark week endured by many on both sides of the Tasman Sea.

"There are almost no words for the stories of both the aftermath and the loss that has followed," she wrote.

"I want to pay tribute to the many people who did extraordinary things to save lives - whether it was through rescue efforts or the ongoing response by health professionals across the country.

"To the recovery team who made it their mission to bring loved ones back from the island, right through to the council, emergency management team who have supported the local community all the way through.

"To (local Maori tribe) Ngati Awa, for the outpouring of manaakitanga (hospitality) and support to all that have needed a safe haven during this time.

"Those who have been lost are now forever linked to New Zealand, and we will hold them close."

Instead of returning to the water, police will spend the day debriefing in Whakatane and the National Crisis Management Centre. .

The threat of another eruption on White Island has been maintained by GeoNet , New Zealand's geological monitoring agency, as between 30 and 45 per cent.

The threat level is as it was prior to the eruption - level two.

As if to underscore the volatile environment in the Bay of Plenty, a magnitude 5.0 earthquake occurred just five kilometres from Whakaari late on Sunday night.

The tremor took place well underground - 133km below the surface - but was still felt by thousands of Kiwis in nearby Whakatane, Te Kaha and other nearby bayside communities.

Australian Foreign Minister Marise Payne will also land in New Zealand on Monday, and is expected to visit both Wellington and Whakatane during a three-day visit.

Will the country's Alert Levels be lowered?