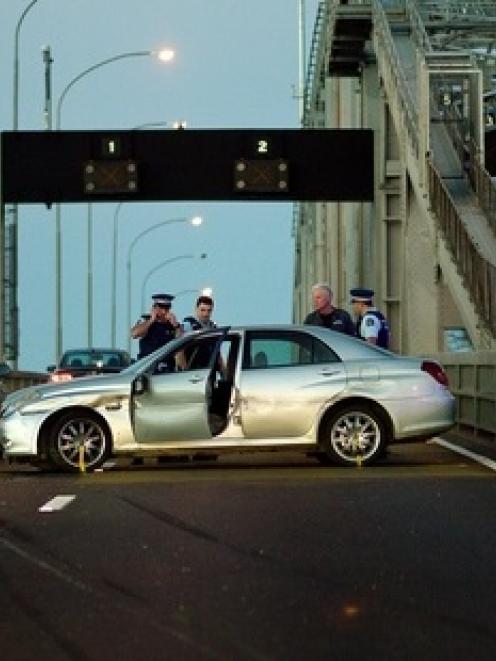 The scene on Auckland Harbour Bridge after a shooting incident and a police car chase. Photo / Dean Purcell
A witness to a dramatic car chase that eventually closed Auckland's Harbour Bridge last night has described the "scary" and "crazy" encounter as the alleged gunman attempted to ram police.

The chase was sparked by a report of fighting and shots being fired off Karangahape Rd in central Auckland around 8.45pm.

One man allegedly fled with a gun and a pursuit followed, police said.

"Oh my God, it was so scary," said Regina, a sex worker who saw the chase unfold on the corner of K' Rd and Edinburgh St.

A car, which drove up Edinburgh St and stopped at the red traffic lights, was quickly blocked by a police car that pulled in front of it, she said. Another police car then turned off K' Rd, from the direction of Queen St, and parked behind the alleged gunman's car.

"The car that was the runaway car .... just starts accelerating into the police car. It was ramming the police car, like bang, bang," Regina said.

"And then it just turned the wheel and got around [the police car], and then went down there [Howe St]. And then after that about six cars just came from everywhere, there were like six or seven police cars that just went down there after it."

Police pursued the car onto the northbound lanes of the Harbour Bridge, where it crashed at the top of the bridge, police said. The man tried to escape on foot, but was caught shortly afterwards and arrested. No-one was injured in the incident.

Regina said it was a scary experience.

"I was standing right here, trying to work and this was happening. I was just freaking out, like oh my God," she said.

Later she said: "It was crazy."

Her friend Brooke, another sex worker, said she heard the gunshots moments earlier from further up the street.

"I was walking out of the Mobil and then, oh my God, I heard these gunshots and then I was checking myself [to see if I was shot]," she said.

The whole situation was over "in a flash", she said.

It's believed the shots were fired in a back alleyway between Grundy St and Edinburgh St.

After the crash, the Harbour Bridge was closed for about 20 minutes while police checked the area, as it was initially believed more than one person was involved.

When the crashed car was searched, a revolver was found on the front seat, police said.

A south Auckland man appeared in Auckland District Court this morning on a string of charges related to the incident.

Jess Samau, 29, was charged with six offences, the most serious of which - discharging a firearm with reckless disregard to the safety of others - carries a maximum penalty of seven years' imprisonment.

He was also charged with failing to stop for police, assaulting a police constable with intent to obstruct him in the execution of his duty, operating a motor vehicle recklessly, unlawful possession of a revolver, and resisting arrest.

He has been remanded in custody and is due to appear again in February, where he is expected to enter a plea to the six charges.