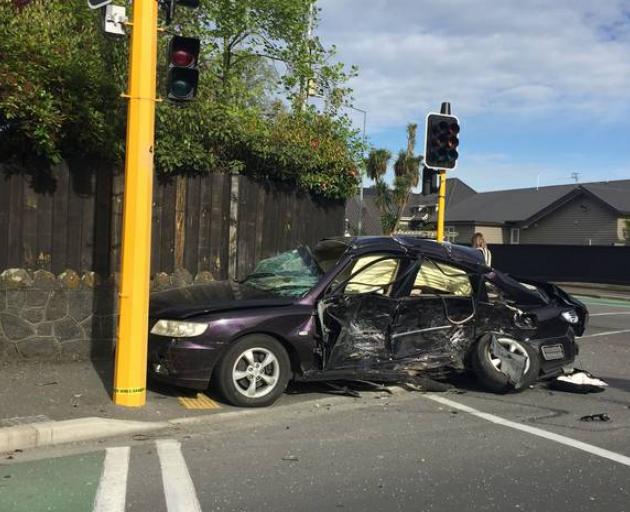 One vehicle came to a rest next to a traffic light. Photo: Rachel Das
A 17-year-old driver has admitted the manslaughter of an innocent motorist killed in a crash as the teen was being pursued by police.

The teen, who cannot yet be named, entered a guilty plea to a charge of manslaughter at the High Court in Christchurch this morning.

Kenneth Patrick Gerard McCaul (64) died in the crash at the intersection of Idris Rd and Glandovey Rd shortly after 4am on October 22.

Four passengers, all in their teens, were taken to hospital with what police described at the time as "moderate injuries".

The Canterbury teenager, appearing in the dock wearing a suit and supported in the courtroom by family members, also admitted a charge of reckless driving causing injury to one of his backseat passengers, also aged 17, who, the court heard, is currently in an induced coma.

He has a broken neck "and his prognosis is not yet known".Justice Rachel Dunningham remanded him on continued bail for sentencing on December 16.

Interim name suppression will be argued before he is sentenced.

Just how the tragedy unfolded can be reported for the first time today.

That night the teenager had been driving four of his young friends around the streets of Christchurch in a Toyota Caldina.

At around 3.58am, a marked police patrol car spotted him, did a U-turn, and parked on the opposite side of the road facing the teen.

When the youngster drove past, the police officer did another U-turn and followed him along Papanui Rd.

As they approached the intersection of Langdons Rd, the police officer activated his red and blue lights for the teen driver to pull over.

However, the teen accelerated away, soon reaching speeds of 90km/h in the 50km/h zone.

Going into the city, he drove through a red light and past the casino. He continued speeding through town before a second marked patrol car joined the pursuit.

As he drove down Glandovey Rd, he went through a red light at the Idris Rd intersection and T-boned a Hyundai saloon driven by McCaul.

McCaul was driving to work early to secure a car park and had planned to sleep in his car before starting his shift at Christchurch Hospital.

The front of the teen's Toyota hit McCaul's car in the passenger side between the front and back wheels, shunting it across the road and into a stone wall. It bounced off the wall and came to rest on the edge of the footpath.

The badly damaged teen's car came to rest about 30m up the road.

McCaul was rushed to hospital but died a short time later, police said.

All four of the teen's passengers were taken to hospital with injuries.

Canterbury metro area commander Superintendent Lane Todd had said the officers involved in the pursuit were receiving support from police.

"The circumstances surrounding the incident are under investigation and as such we're unable to release further details at this stage," he has said. 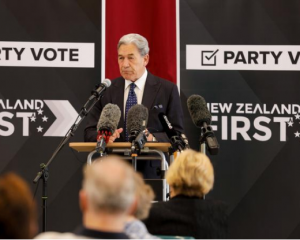 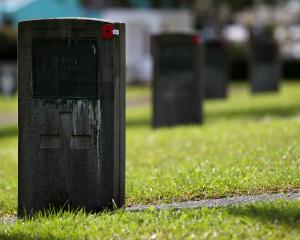