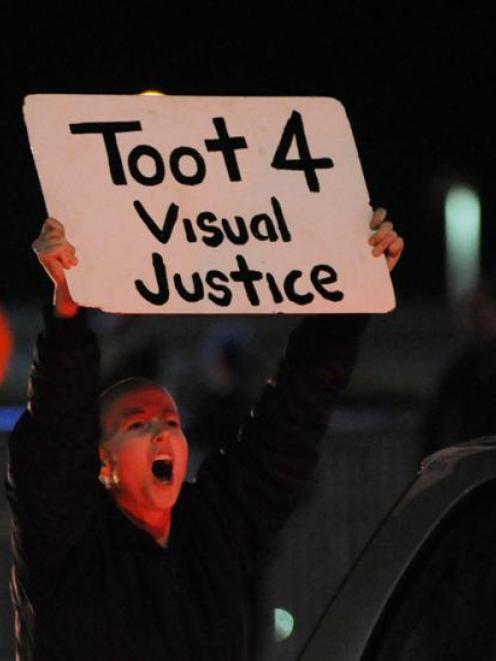 In a poll of 300 Wellington residents 64 percent of those who were aware of the debate opposed the sign's erection, compared to 22 percent who supported it.

Almost half of those questioned (44 percent) strongly disapproved, with 13 percent neither approving or disapproving and 1 percent unsure. The poll had a margin of error of plus or minus 5.7 percent.

The poll came amid mounting opposition, with 21,628 liking the Facebook group "Wellingtonians Against the Wellywood Sign", while the "Support WELLYWOOD" page had 10,032 likes.

Last night a group of protesters "blockaded" the airport, circling the drop off areas in cars with signs such as "stop the sign", and "toot if you don't want the sign".

More than 140 people said they were attending the protest, which planned to "seriously disrupt the airport's operations".

Wellington International Airport spokeswoman Kat Lintott told NZPA yesterday it would be go ahead with building the sign despite the opposition.

A Marlborough brewery was offering 15 cases of beer "no questions asked" to "anyone who knocks it down".

"Seeing as the sign itself is completely un-original it would be nice if it could be destroyed in a completely original way, so feel free to think outside the box a bit," Blenheim brewery Moa said on its website.

Ms Lintott said Moa's campaign was positive and "tongue in cheek" in a similar vein to the sign itself.

"As long as there is no vandalism against it I think the idea is positive," she said.

The airport had a strong policy on graffiti and vandalism, so would be "keeping an eye" on the sign once it was erected.

Airport chief executive Steve Fitzgerald earlier said: "I expect widespread support for the intent of a sign, even if a Wellywood sign isn't everyone's cup of tea. Everyone benefits from increasing tourism for Wellington."

The structure had already received resource consent and was expected to be erected on an area of the Miramar hillside, owned by Wellington Airport, in June.

The company gave no indication of just how soon the sign will be hoisted up the hillside, its colour or how much it will cost.