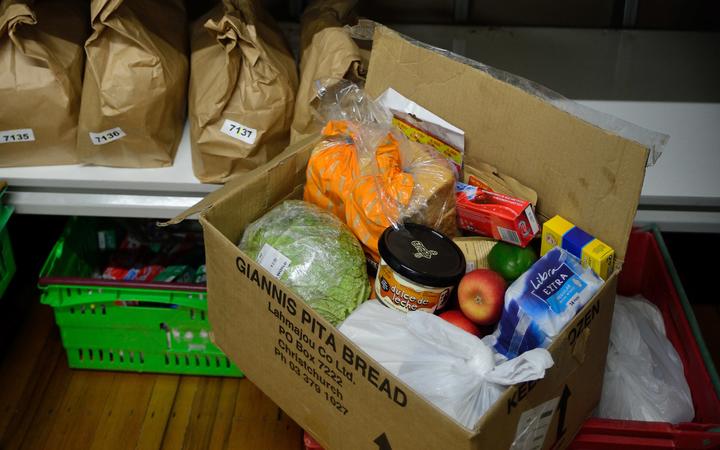 The number of food parcels handed out by the Auckland City Mission is climbing. Photo: RNZ
Record numbers of people are asking the government for help to pay for their food and accommodation, and frontline community workers are labelling the situation a ''crisis''.

Latest figures from the Ministry of Social Development (MSD) show the amount of money being paid to motels to house the homeless has more than doubled compared with the corresponding time last year.

That translates to 29,000 emergency housing grants being given out in the three months to September.

The grants, which cover motel stays for those with nowhere else to go, were at 15,000 the same time last year.

Social development minister Carmel Sepuloni said the increase showed the government was providing assistance to those who need it - and blamed the previous government for failing to create more homes for New Zealanders.

"The Emergency Housing Special Needs Grant, and the placement of people into motels - the way in which we see it now - actually started under the previous government.

"If there had been a robust plan to respond to the housing crisis we wouldn't be in this predicament."

She said the government was working as quickly as it could to build housing stock, but in the meantime would be using motels to house those in need.

It's not just accommodation that people are struggling with - the figures paint a picture of soaring demand for the basics.

The number of Hardship Assistance Grants handed out has climbed to more than 570,000 over the September quarter, at a cost of $167 million.

Included in that is Emergency Food Grants, with $26 million has been given out, up more than 90 percent on the same time last year.

"We're reaching record levels of food poverty in Aotearoa and it is reaching crisis levels."

Mr Menéndez March said the high need for hardship assistance showed the government had not followed through on its claims that it would run the country with kindness.

"Keeping benefit levels below the poverty line is not kind or compassionate.

"What we've got at the moment is a system that's not working, it's putting massive pressure on households and MSD staff and if the government wants to take a kind approach they could just raise benefit levels."

But Ms Sepuloni said was clear that won't be happening.

"Food grants are up in places where housing costs are high or there are housing demands so we've got to address the housing issues - and this government's working hard to do that.

"Raising benefits on its own without addressing cost pressures wouldn't achieve what some people are implying it might."

I thought Jacinda was going to fix this issue?? Pre-election all we heard from Labour was poverty, homelessness and sleeping in cars. Now it's never mentioned..how odd

You can rent control, a practice overseas.