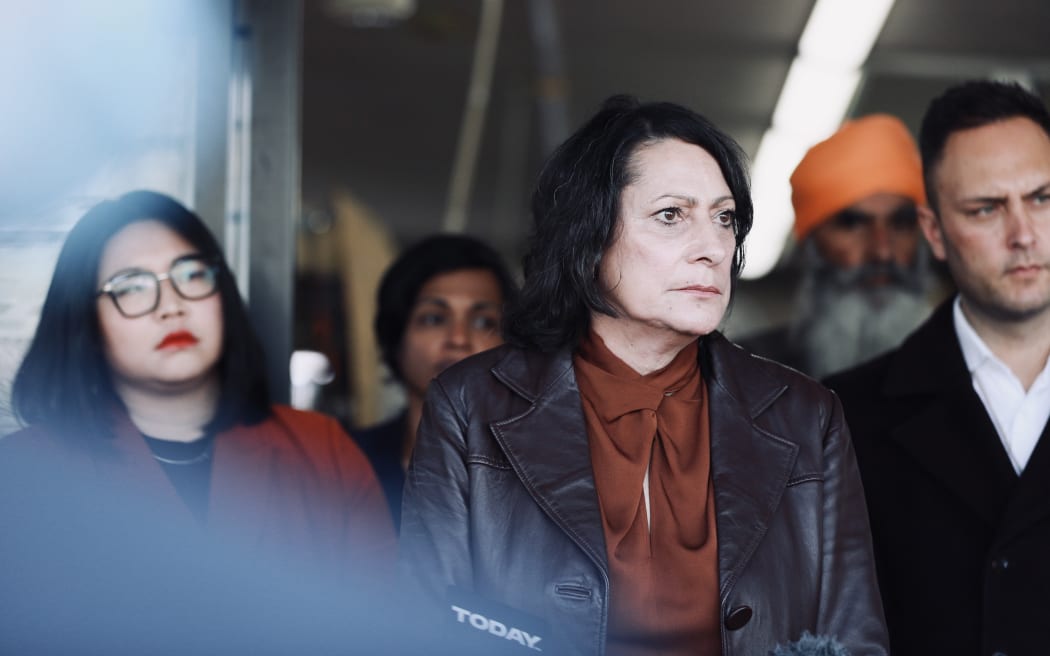 Auckland has seen a spike in gun violence in recent days, with seven gun attacks on Tuesday night linked to gang tensions and another two shootings overnight on Wednesday.

National's leader Christopher Luxon described them as among the most horrific New Zealand's largest city had seen, saying it gave weight to the case for warrantless police search powers "to go after illegal guns, because illegal guns are what's the problem here".

Minister Williams was in Auckland this morning to announce $6m from the Proceeds of Crime Fund would be spent by police on installation of measures such as bollards for retailers after a spike in ram raids.

She said police had already started to make arrests after this week's shootings and the public should "absolutely" expect a decrease in this escalation in gun crime.

"That's my assurance to the people of Auckland."

She could not say to how many shootings could be expected over coming days and weeks, but "what I can speak to is conversations I've been having with police to say how deeply distressed I am that these are happening".

Police were aware the tensions between the Killer Beez and Tribesmen gangs had been "simmering" for a while, she said, and were actively working across Auckland as well as Northland.

"It's really unfortunate that this is playing out now across our city and Northland in this way, and I have expectations that the police will do their job not only to bring this to conclusion but they will be successful in the prosecutions that they take as well."

She was confident police had the resources to get on top of the problem, helped by the government's efforts to increase gun control measures after the terror attacks on Christchurch mosques in 2019 which she said had taken 10,000 weapons off the streets in three years.

Gun control has also been a hot topic for Prime Minister Jacinda Ardern, who is in the United States as part of a trade delegation.

Her visit has coincided with yet another school shooting in the US, the deadliest in a decade, with 19 primary school-aged children and two teachers shot dead in Texas.

American lawmakers including President Joe Biden are again under pressure to do something about gun laws, but that's been tried before with little to show for it.

In New York yesterday, Ardern told The Late Show host Stephen Colbert, although New Zealand had made progress, the system was not perfect and there was still work to do.

She spent her morning in Washington DC today meeting senators and representatives, and said her approach had been consistent with all of them.

"It's not for me as the leader of a nation with different histories and experiences to tell other nations what they should or should not do, all I can do is reflect that New Zealand had its own horrific experience and that we made changes as a result."

She repeated there was more work to be done on the issue in New Zealand, however. One of the next steps is a gun register, announced in 2019 but which will not be operational until next June.

"Once the register's implemented we will see improvements, they won't happen overnight but over time the number of firearms in the black market will definitely come down."

The opposition has instead been pushing for greater police powers.

Along with Luxon's call for warrantless searches, ACT spokesperson Nicole McKee - a former firearms owners' spokesperson - put forward a member's bill which would allow police to seize the assets of gang members found with an illegal gun.

It was voted down by the government last week.

"It was all there for the government and they rejected it, and in the last four days we've now had a total of 12 drive-by shootings in Auckland. It's ridiculous - we've got to do something about this," she said.

"I guess what a number of people are afraid of is, where increased powers are extended to the police they tend to be just the go-to default position, least line of resistance, rather than actually making sure that things are done in the correct way and in the way that we want it done within a civil society."

He said the proposed register would be an easier way to investigate a shooting after it happened, but may not deter people from owning firearms.

This year's Budget also set aside $208m over four years to establish a new Firearms Business Unit within police to oversee the register and other ongoing Arms Act legislative changes.