Police collect evidence in the carpark of the Te Toto Gorge lookout on Whaanga Rd, south of Raglan on Friday morning. Photo: NZME
Waikato police investigating the alleged shooting of an Australian tourist are calling for sightings of a man seen hitchhiking on the outskirts of Hamilton.

And Detective Inspector Graham Pitkethley says police are still on the hunt for the weapon used in the incident during the early hours of Friday morning.

Sean McKinnon was shot in the rented campervan he and his partner, Bianca Buckley, were sleeping in at Te Toto Gorge.

Buckley managed to escape on foot, running about 2km to a nearby home for help.

McKinnon's body was eventually found in his rented camper van at Gordonton, north of Hamilton, at 8am on Friday, just over five hours since he was allegedly shot.

The 33-year-old had been on a surfing holiday with his Canadian fiancee Buckley.

While police have arrested and charged a man with McKinnon's murder, Pitkethley said they were still piecing together what allegedly happened but as part of that were keen to hear from anyone who may have seen a man hitchhiking in the Gordonton-Whitikahu area on Friday. 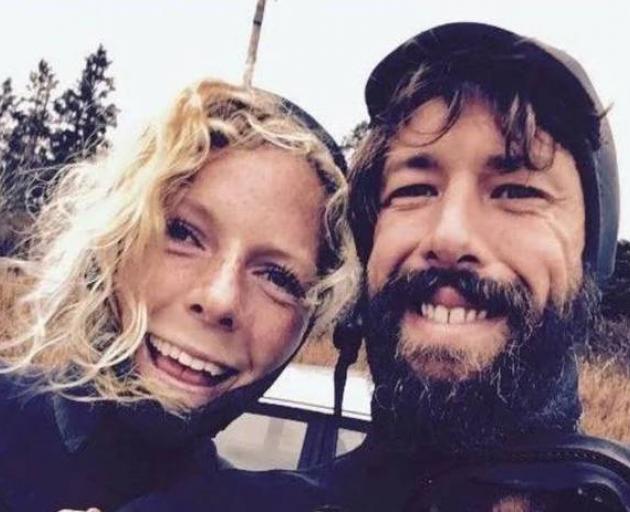 Australian Tourist Sean McKinnon with fiance Bianca Buckley. Photo: Facebook via NZME.
In particular, he was interested to hear from motorists who have incidentally caught footage on their dashcam.

"As part of our ongoing inquiries, police are looking for anyone who may have seen any hitchhikers in the Gordonton–Whitikahu area during daylight hours on Friday.

"Particularly, if any motorists that travelled this route on Friday have dashcam footage, police would like to hear from you."

Several people commented on social media about seeing a man acting suspiciously in the area on Friday morning.

Lawrence Wallis told the Herald his wife told him they could see a large police presence at the Whitikahu Hall on Friday.

Driving home from Auckland, Wallis told them all to get inside, which they already were.

"When I got home at 6.45 there were a doz [sic] patrol cars and helicopter. Could hear a loud hailer but I didn't hang around outside as the helicopter noise meant I couldn't hear anyway."

He said his 8-year-old also saw a man hitchhiking past their house on Whitikahu Rd about 4.30pm.

Wallis said in hindsight, it was "pretty scary to think he walked right past our gate".

He said while he appreciated the fact they did catch the alleged offender, he wondered why the public wasn't told until about 10am Saturday, nearly 12 hours after an arrest was made, before telling the public.

He hoped next time they would keep the public more informed, especially when or if, an arrest had been made.

"It was a worrying night through to 10am Saturday when they announced they had arrested someone. It's my understanding the got him at 11pm so a simple post saying someone is in custody would have relieved a lot of people overnight.

"I know we checked Waikato Police Facebook page every 10 minutes once the commotion started at the hall looking for information."

Several other residents reported seeing a man about a similar time including one woman who said it appeared as though he was hiding something underneath his jacket.

She said he told them he was looking for his brother's farm but didn't know where it was or the road name.

Pitkethley said they still looking for the weapon involved but he wanted to assure the public that the community was safe.

"Officers have also been conducting reassurance patrols in the Raglan and Gordonton areas to ensure the public is safe and feels safe."

They were now working with the coroner to return McKinnon's body back to his family in accordance with their wishes.

McKinnon, 33, grew up around Warrnambool in Victoria's southwest. The pair got engaged around Christmas 2017, according to their social media.

McKinnon's sister, Emmeline, said he was a world traveller who lived for surfing, friends and family.

"He did everything with a smile.

"He was devastatingly handsome and a caring, sensitive young man, even as a boy. He would always tell you he loved you and would give you a hug.

"He had a great sense of humour."