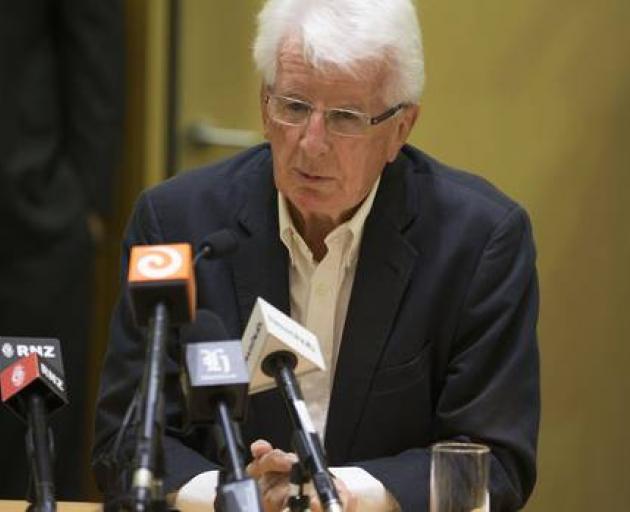 RNZ chairman Richard Griffin may be looking forward to the end of his term heading the board. Photo: NZ Herald

RNZ chairman Richard Griffin offered his resignation to Broadcasting Minister Clare Curran the day she was appointed but she asked him to stay on.

After an already fraught few weeks in their professional relationship, the pair are now at the centre of a "he said, she said" over a voicemail Curran left on Griffin's mobile phone about an upcoming parliamentary committee appearance.

"I proffered my resignation to her the day she was appointed. I think it was the honourable thing to do," Griffin told the Weekend Herald.

Curran, he said, was gracious and asked him to stay on during the transition to the new Labour Government.

"It's no secret Clare and I aren't exactly bosom buddies but I thought it was a reasonable thing to ask and I was happy to do so given that it was going to be a difficult time for all of us.

"But not quite as difficult as it has turned out to be."

Griffin's third term as chairman of the RNZ board finishes at the end of April, nine years in all. He doesn't anticipate an invitation for a fourth, nor would he want one.

"No I would not," he said emphatically.

"I think I've run my course and I'm sure they do too."

Now in his mid-70s, Griffin said it was time for this elderly white man to move on "and make way for the young hustling media voices".

Griffin will spend this weekend at his home in Ruby Bay, west of Nelson, deciding whether to voluntarily hand over the voicemail on his mobile phone.

He had asked RNZ to retrieve the voicemail after it was requested by the Economic Development, Science and Innovation Select Committee following his and RNZ chief executive Paul Thompson's appearance on Thursday.

But even as efforts were being made to extract the voicemail, Griffin was reconsidering.

He worried that refusing to hand over the recording could further damage RNZ but said there was nothing to be achieved by releasing it.

"I will decide over the weekend," he said.

The recording either clears Curran of trying to block Griffin's appearance at the select committee to set the record straight on her meeting with Carol Hirschfeld or it could damn her if, as Griffin claims, she suggested it would be better for him not to appear and that a letter would suffice.

Hirschfeld was forced to resign after repeatedly lying to her bosses over a meeting she had with Curran in December. She had said it was a chance encounter but Curran later said it had been diaried.

The pair met at Wellington's Astoria cafe but the substance of what they discussed has not been revealed.

When the end of the month comes, Griffin will be out of the melee.

He's decided to offer his services to Nelson ARK, a local organisation that pairs rescue dogs with troubled children.

"Children and dogs, that'll work for me."

Griffin sees a bright future for RNZ and RNZ+ as long as it embraces more than a linear television model such as TVNZ 7 - the government-funded commercial-free 24-hour news and information channel which was canned after six years.

"It'll be television, no doubt, but it will be media on the whole range of technology that younger people use. The concept of reinventing a Channel 7 simply doesn't make sense."

His biggest regret of his nine years with RNZ? "The last few weeks."

"I really regret that a great talent and an interesting woman is now having to suffer the slings and arrows. I'm sorry for her. I believe that Carol thought her loyalty to the Minister checkmated her loyalty to the company and I can understand how that could happen.

And we don't know what possessed you Richard Griffin to let broadcasting sink to the level it is now where its hardly worth watching or listening to. Very little local content or local debate or investigative journalism. Channel 7 was the only thing of value we've had for years. Happy retirement and take Thompson with you.