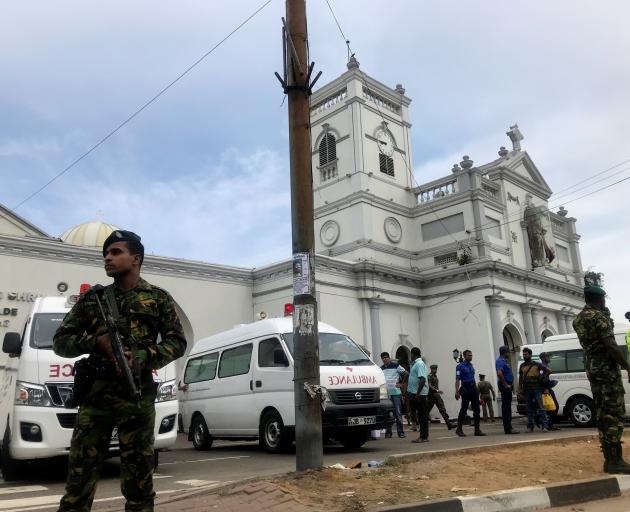 Sri Lankan military officials stand guard in front of the St. Anthony's Shrine, Kochchikade. Photo: Reuters
Reports that the Sri Lankan suicide bombings over Easter weekend were retaliation for the Christchurch mosques terror attacks and were carried out by IS are being treated with caution by the New Zealand and Sri Lankan governments.

Sri Lankan junior defence minister Ruwan Wijewardene has said the initial evidence shows the terror attacks on three churches and four hotels across the country, which have now killed 321 people including 45 children, were in retaliation for last month's mosque shootings in Christchurch, New Zealand.

Some observers doubt the Sri Lankan horror could have been concocted in the six weeks since the 15 March mosque attacks in Christchurch, so could not have been provoked by them.

IS has also claimed responsibility for the eight suicide bombings, claiming through its news agency it has learnt the bombers were Islamic State fighters. In the past, IS has sometimes claimed attacks that it was not involved in or which it simply inspired, but the choice of targets is much more in line with IS ideology than with the traditional types of communal violence seen in Sri Lanka.

The organisation also made no mention of the Christchurch attacks, and provided no proof of the bombers' affiliations.

New Zealand's Prime Minister Jacinda Ardern has expressed caution about the claims. A spokesperson for her office said she was aware of the reports of a link between the two attacks, but had seen no evidence yet. 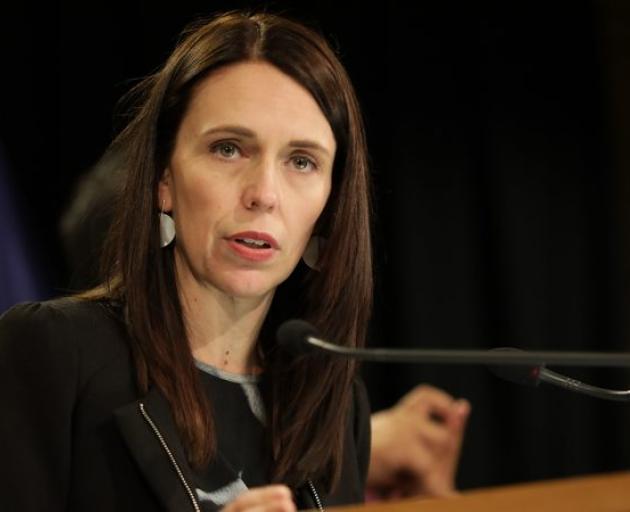 Jacinda Ardern. Photo: RNZ
"We understand the Sri Lankan investigation into the attack is in its early stages. New Zealand has not yet seen any intelligence upon which such an assessment might be based," the spokesperson said.

Her Sri Lankan counterpart Ranil Wickremesinghe has also said it was too early in the investigation to link the attacks.

"It's possible it could have been because of the Christchurch attacks, we cannot say yet. I think the police, once they question ... will be able to find out."

The Sri Lanka government has maintained that the attacks on Sunday could not have been carried out without support from terror groups abroad.

Sri Lanka's government has blamed the blasts on local Islamist group National Thowheed Jama'ut, a claim backed by the defence minister who claimed there was a link to the New Zealand attacks.

"It was done by National Thawheed Jama'ut along with JMI," Mr Wijewardene said, referring to another local group, Jammiyathul Millathu Ibrahim.

NTJ has no history of large-scale attacks but came to prominence last year when it was blamed for damaging Buddhist statues. The group has not said it carried out Sunday's bombings.

Sunday's attacks have highlighted rifts in Sri Lanka's leadership, after it emerged that authorities were warned about an imminent threat from the NTJ jihadist group. Mr Wickremesinghe and the cabinet were not informed, ministers said.

Mr Wickremesinghe also said the 40 suspects arrested so far were all Sri Lankan citizens, however some were thought to have travelled overseas. There have been suggestions that a Syrian national was among the attackers, pointing to the possibility they were associated with IS.

"There seems to have been foreign involvement, they feel that some of them [the terrorists] might have travelled abroad and come back. There may be more than that, that's what we want to find and that's why we have asked for assistance on this issue."

''We ... are of the view there are foreign links and some of the evidence points to that. So if the IS (Islamic State) claimed it, we will be following up on this claim," he said.

Security expert Paul Buchanan said he thought the two attacks were "very unlikely" to be linked.

"I would take these claims with a very healthy dose of scepticism, and the reason for that is both ISIS and the Sri Lankan government have their own reasons to deflect from the local nature of the attack.

"ISIS of course is on the run and wants to claim things that are possibly beyond its scope at this point but make the event broader than it is and the Sri Lanka government wants to deflect from its failures of intelligence that facilitated this.

"More importantly, the amount of preparation and planning needed to undertake these coordinated simultaneous attacks simply is too long for it to have been attributed to the March 15 attacks. We're a month out from the March 15 attacks, they were getting intelligence warnings ... that people were stockpiling explosives before March 15th."

Falling into retaliatory rhetoric over the attacks is dangerous, he said.

"We fall into the false narrative of the clash of civilisations," he said.

"If we get into tit for tat attacks ... we get into a cycle of violence that quite frankly has not occurred in the past. In the past, attacks are done randomly.

"The way the global media is covering it is falling into that trap and conservative media outlets around the world have already cast this as a 'Christianity versus Islam' thing when in fact ... both Muslims and Christians are a distinct minority in Sri Lanka and they're both oppressed by Buddhists.

"If I look at the methodology of the attack I think 'well, the Catholic churches were attacked because they were incredibly soft targets and they were not defended ... even in spite of the intelligence warnings to the government about the choice of targets.

"The attacks on the hotels are clearly designed to hurt tourism business in Sri Lanka, on which it depends very very strongly."

A terrorism researcher at the London-based Asia-Pacific Foundation, Sajjan Gohel, said a connection between the two attacks was possible.

"This attack didn't happen overnight, we're talking about a lot of planning reconnaissance, because the attack was so well coordinated and synchronised."

"We do know that after the Christchurch attack, ISIS specifically called for attacks during the Easter holidays. Could this have been put together in that time? Not necessarily, but perhaps the timing coincided then with a motivation to bring the plot forward."

He said the scale of the attack showed it was likely backed by a powerful transnational actor.

"This was a huge terrorist attack because of how well coordinated it was: in multiple locations, near simultaneous explosions, well researched by the terrorists in terms of the targets - the churches, the luxury hotels.

"[The] local outfit that the authorities have named are pretty much an ordinary violent gang - they have been involved in defacing statues, doing graffiti on walls, nothing on this scale.

"We're talking about a major leap if they've moved from petty organised criminal activity to carrying out one of the biggest attacks that we've seen - bigger than the Bali bombings, the Madrid train bombings."