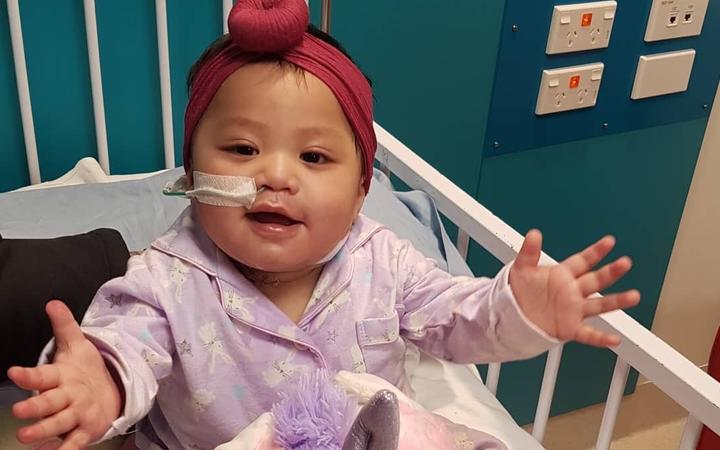 Lakyn-Ray Auloa has recovered after a four-week ordeal with measles. Photo: Supplied to RNZ by Sose Auloa
An Auckland baby who came close to losing her life from a horrific bout of measles has made an incredible recovery.

Ten-month-old Lakyn-Ray Auloa is expected to be able to go home soon after a four-week ordeal which saw her undergo emergency surgery and spend seven days on life support.

Speaking from Starship Hospital, her mother, Sose Auloa, said she took her daughter to Middlemore Hospital with flu-like symptoms. She was initially diagnosed with pneumonia and measles was not detected at first.

"We were there for about seven days at Middlemore and throughout that process she got worse by the day.

"With everything else that was happening with her body, the measles just took every bit of strength that she had in her," Ms Auloa said.

Surgeons travelled from Starship Hospital to Middlemore to perform emergency surgery, because it would have been too risky to move her to Starship at the height of her illness.

"It was a life and death sort of situation where we were advised that it was their last option and that she could come out of the surgery with ... brain damage, or she may never wake up again."

The operation took about three hours and she came out without any signs of brain damage.

Lakyn-Ray remained on life support for seven days and it was not known how long it would take for her to wake up.

"They did say it will take longer for her to wake up because she's been really sick. But Lakyn-Ray woke up on the seventh day," she said.

She is now expected to make a full recovery and it is hoped she can go home soon.

"The support we've had has just been amazing," Ms Auloa said.

"From all the amazing hospital staff, to our jobs and our churches - it's meant so much. We're really grateful."

Babies generally receive their first MMR vaccine at 15 months, so Lakyn-Ray was not yet immunised for measles.

Ms Auloa said she did not know quite how dangerous the disease could be.

"I thought it would just be a rash sort of thing and be treated and go away."

She hoped her daughter's ordeal would serve as a warning to people to get the vaccine.

"It's for the health of those around us, especially our babies. Just get those injections done," she said.

Another baby who travelled from Auckland to Christchurch was yesterday confirmed to have contracted measles.

There are currently more than 1000 cases of measles in Auckland.