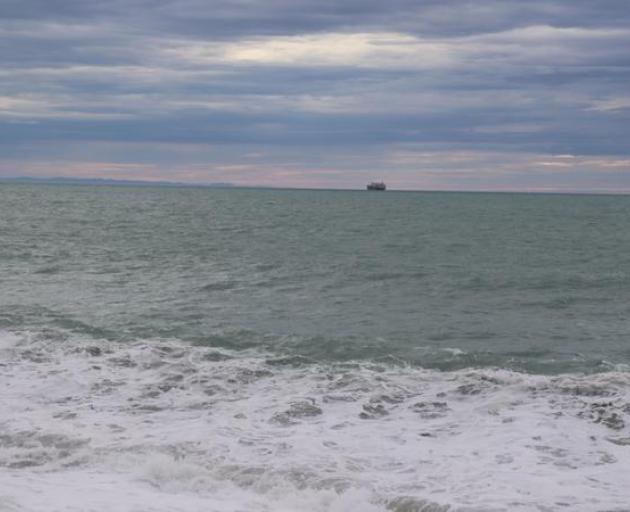 The Ken Rei is at anchor off Napier awaiting official advice after a Covid-19 scare. Photo: RNZ
There are renewed calls for crew of foreign vessels to be tested for Covid-19 before they dock at ports in Aotearoa New Zealand.

It comes as the vessel the Ken Rei remains anchored at sea off Napier's coast with 21 close contacts of a man who tested positive for the virus on Saturday.

The Ministry of Health (MoH) said the marine electronics engineer who tested positive likely caught the virus while working on a ship which is now bound for Brisbane.

And a crew member on a ship which arrived into New Zealand waters last week returned a weak positive test yesterday, indicating he may have had the virus in the past.

Maritime Union national secretary Joe Fleetwood said the cases highlighted the need for all foreign seafarers to be tested before they landed here.

"You've got a port worker which comes into contact with a foreign seafarer on board and if they just so happen to have the virus then that's the point of infection," Fleetwood said.

"It should be mandatory for foreign crew to be tested as well - it's madness that they're not."

The MoH said crew that were flown into New Zealand would be taken straight to the port to join their vessel if it was leaving port that day, after being collected by a vehicle with a driver in PPE gear.

"As they have no interaction with the community they are not required to have a test."

But Fleetwood said crew then came into contact with port workers.

"We've got guys who are worried to go to work because they don't think the testing regime is strict enough.

"It's a catch 22 because we have port workers who are being tested before they go onto a vessel - they go onboard- but when they come off they finish their shift and go home."

He said the Maritime Union had been asking the government to test crew on ships before they come into New Zealand waters.

"They can be tested onboard or at the port they leave from - so before they even get here we know that a particular ship may have a positive case onboard and then we can take stricter measures."

Before he knew he had the virus, the engineer travelled to New Plymouth to work on another ship.

Taranaki's medical officer of health, Dr Jonathan Jarman said four close contacts and nine casual contacts had been identified and were linked to the port and two hotels.

He said because the engineer kept to himself the risk to the community was low, but if people have symptoms they should get tested.