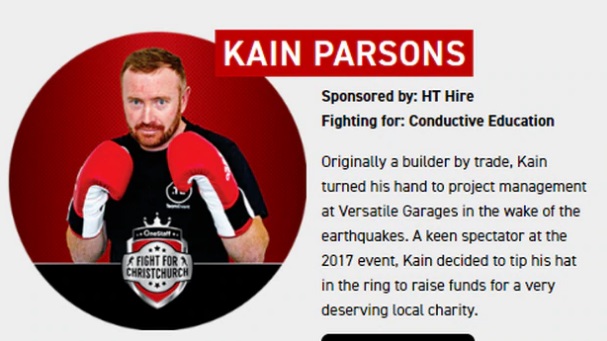 Kain Parsons' promotional material on the charity boxing promoter's website.
A charity boxing match that has left a Christchurch man fighting for his life has sparked calls for urgent safety changes.

Kain Parsons is fighting for his life in intensive care after competing in the charity boxing event Fight for Christchurch.

Currently each bout can have a different set of rules and there are fears inexperienced boxers will continue to be put at risk when they step into the ring if something isn't done.

Two years ago, a man collapsed and died during a charity bout in Hamilton.

His death sparked outrage, yet two years later and with the number of events growing, Auckland Boxing Association president Paul McSharry said not much has changed.

Promoters did not always put the safety of fighters first, Mr McSharry said.

"They all have similar rules but not the same, so the promoters will generally go with the organisation that makes things easier for them or cheaper."

It's up to the Department of Internal Affairs to green stamp boxing and wrestling associations to promote or approve competitions under the Boxing and Wrestling Act of 1981.

There were more than 50 associations approved as of October 2016, and all can have differing rules about protective gear, training and medical requirements.

Mr McSharry said the law needed to be changed so there was only one governing body - or others would be put at risk.

"Corporate boxers, they're unknown as far as their history is concerned. They're not full-time boxers and we have a duty of care, because if we don't the game will be over," he said.

Mr McSharry decided to take matters into his own hands and write up governing rules for all corporate boxing matches approved by his association.

Under his rules, competitors have to wear headguards, undertake a medical examination by their own GP and have a registered trainer.

The bout was approved by the New Zealand Professional Boxing Association, which approves or promotes about 50 corporate bouts each year.

Association president Pat Leonard said the boxers had a pre-bout medical check by a registered doctor and were told by the supervisor about the risks.

"We do everything as the law requires and do even further. After all, our aim in corporate boxing is for both boxers to stand on their feet at the end of the fight, hug and kiss each other, saying 'what the hell were we doing here in the first place?'"

The former New Zealand boxing coach said charity and amateur boxing should have the same rules, which includes compulsory headguards.

Trainers and promoters need to take responsibility for the safety of their boxers, he said.