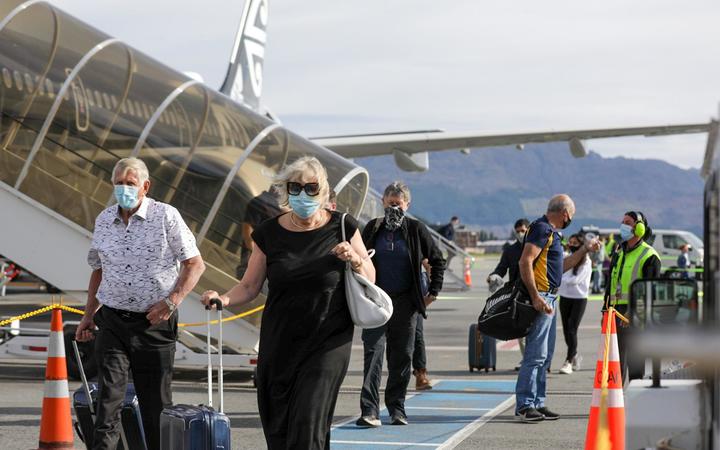 Passengers arriving in Queenstown on the first flight from Auckland in December after border restrictions lifted. Photo: RNZ
It's been another summer without international visitors - the lifeblood for tourist hot spots in the South Island.

For weeks, operators in Fiordland, South Westland, Queenstown, the Mackenzie and Kaikōura geared up to welcome visitors during what was usually the peak season.

But did that translate to boots on the ground for businesses?

Kaikōura Kayaks has been embracing a summer of dolphin sightings and people out paddling.

Owner-operations manager Matt Foy said it had been a bit quieter than last summer but overall he was pretty happy.

"It's just so uncertain at the moment, especially with Omicron sitting on the doorstep."

After a few years of disappointment - particularly with the trans-Tasman bubble, he was taking a cautious approach to the year.

"At the moment you can only do so much. You've got to be careful of how much planning or money you put into advertising, towards what might or may happen in case it doesn't come to fruition.

"Because you can lose a lot of money in advertising and a lot of time spent on planning for it to not actually come to pass."

Te Anau Lakeview Holiday Park & Motels was bustling from Boxing Day to early January with between 900 and 1400 guests at any given time.

The holiday park's manager, Nakul Behel, said it was great to be busy, but it did not have enough staff.

"To manage 1400 people, it takes a lot of time, energy and planning, and staff," Behel said.

"Pre-Covid times we used to have 50 plus staff on every shift. But this time we only had nine housekeeping staff, two front office staff and one (for) accounts."

It had had about 70 rooms blocked out for more than a year.

"We had to block it, there was no option. If we open it then, it will sell. If it sells, we have to clean. How will we clean? We didn't have staff.

"So that's the reason we blocked it, and, yes, it was a peak season and we blocked our rooms."

The park was quiet again with their biggest hope now set to next summer and 2023.

Behel expected 2022 would be much like last year with no consistent flow of international travellers, and a lot of uncertainty.

"So many restaurants shut down, shops shut down or sold. People left Te Anau.

"We used to have only a single taxi service in Te Anau and that was doing so well pre-Covid times. They've gone. They've sold everything and went to Auckland."

Its West Coast skydiving business was open for morning and afternoon jumps - which has been a rarity - while the Mackenzie operations sent plenty of people sky high, she said.

"We've seen busy days where we've flown over 100 people in one day up to the Tasman Glacier, and having two helicopters and a ski plane flying back-to-back so that was just brilliant, but very short-lived.

"However we've got sprinklings of bookings still going on throughout the summer up there but it is just a sprinkling of bookings."

She expected their next boost would be over the long Waitangi weekend.

"Reality is - I would say and it's awful to say but summer's probably going to be done and dusted by the end of January in terms of that busyness that we normally expect during summer.

She was holding out hope Australians would be able to pop across the ditch - isolation free - by winter.