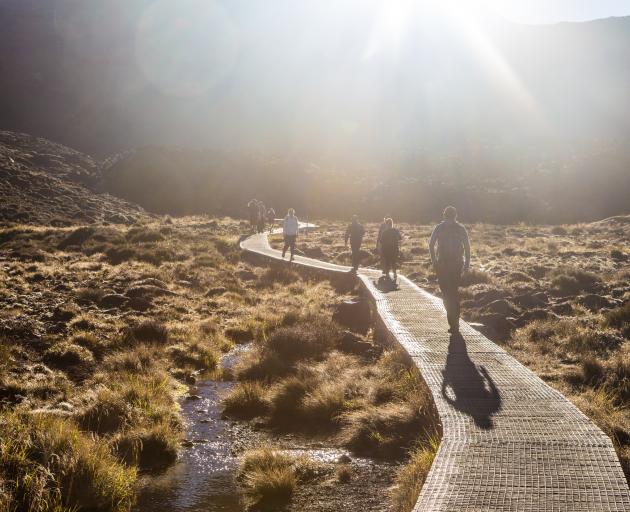 Police and the Department of Conservation consistently warn trampers in a group to stick together om the Tongariro Crossing. Photo: Getty Images
The tramper who was killed while hiking on Mount Tongariro has been named.

He was 54-year-old Sateesh Babu Halehally-Chikkanna.

Earlier today a police officer spoke out about how he was frustrated by trampers refusing to heed warnings about the risks of hiking the Tongariro Alpine Crossing.

Senior Constable Barry Shepherd said Mr Halehally-Chikkanna set off from the Ketetahi carpark with three others on Monday morning.

"Now we all know that it's an alpine environment, and the weather deteriorated," Mr Shepherd said.

Once the group reached the bush line just below the Ketetahi hut - about two hours into the trek- they split up.

Three of the men continued along the track, before veering off toward the Oturere Hut where they called police for assistance.

"In the meantime their friend continued on the crossing, his wife subsequently reported him overdue and that's when we started searching for him."

Mr Shepherd said it was not clear why the group had decided to separate - a move that hiking groups, police and the Department of Conservation have consistently warned trampers not to do.

"The take home message out of all of this is that anyone anticipating or contemplating a trip on the Tongariro Alpine Crossing needs to realise that they need to take notice of the weather forecast, they need to be properly dressed and equipped, they need to be prepared to turn back if the going gets tough or the weather goes bad, and they must stick together," he said.

"If you start together, you must finish together."

It would have been easy for the group to turn back at the point where they became separated, he said.

"It would be very easy for any group to stick together and make a combined decision to turn back when the weather goes bad," he said.

"People need to actually start listening to us ... there is frustration from us all because a lot of these situations are so easily preventable."