Scrap between DHBs and junior doctors heats up 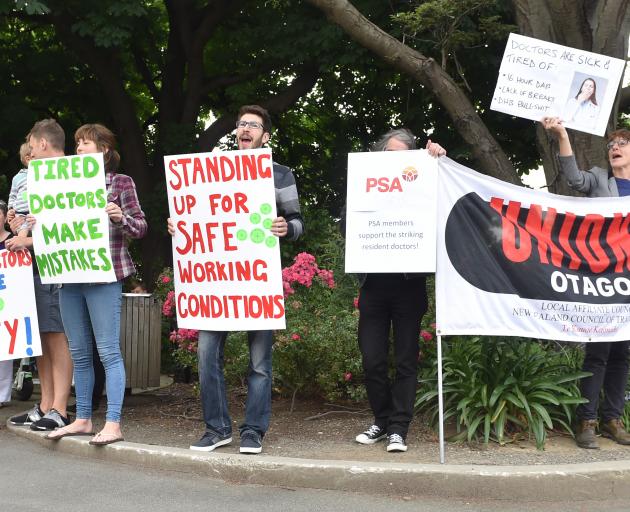 Junior doctors for better conditions. Photo: Peter McIntosh
District health boards are accusing the junior doctors' union of making statements in public and to its members that are inaccurate and misleading and or deceptive.

However, the union disputes the DHB's claims.

The request to intervene was made by all 20 DHBs last Wednesday. It comes amid ongoing strike action by the doctors, who walked off the wards last week for 48 hours and will do so again on 26 February, with a fifth strike being considered for 12 March.

The latest round of mediation on Friday ended with the RDA saying DHBs were demanding "unilateral power to make changes to RMOs [junior doctors'] terms and conditions of employment and made it clear that this is a non-negotiable position".

In their letter to the ERA, the DHBs said the RDA was "undermining the bargaining by passing inaccurate information about the bargaining to a third party which is publicly criticising the [DHBs'] bargaining position".

The DHBs wrote that a media release from the senior doctors' union - the Association of Salaried Medical Specialists - stated that an offer by the-then Medical Council chair, Andrew Connolly, to meet the parties involved in the dispute had been raised in mediation but rejected by DHBs.

However, the DHBs said this offer was never raised at all.

This is backed by the mediator Keith Shaw who said in a letter he did not recall it being discussed and could not find any reference at all to the Medical Council in his notes from the day.

DHBs said they asked the senior doctors' union to withdraw the release but it refused, saying it had discussed the issue with the RDA which was adamant it had proposed the Medical Council's offer at mediation.

The DHBs said they were "extremely concerned by the role [senior doctors' union was] taking in this matter".

"Your union is not a party to the RMO bargaining, and as is demonstrated by the current situation, is not necessarily receiving accurate information about what is occurring."

They said the union's media statement was "neither appropriate nor helpful".

The DHBs said the junior doctors' union was required to bargain in good faith, but they say the union has made statements in public and/or to its members "that are inaccurate and/ or which were not provided to the [DHBs] prior to publication".

These statements had contributed to decisions made by the [union's] members to vote in favour of taking industrial action, and it was undermining bargaining, they said.

The DHBs also describe instances of what they said were inaccurate statements made in TV ads and in the media.

The ERA is yet to make a decision on the application.

"We're confident of what we say, we've been doing this for a long time, we know what the rules are and we take them very seriously."

Mr Munro said it was disappointing the DHB had called in the ERA, and it would have little impact because the claim would not be heard until well after the dispute between the union and the DHBs had been settled.

New Zealand moves up alert levels: What you need to know