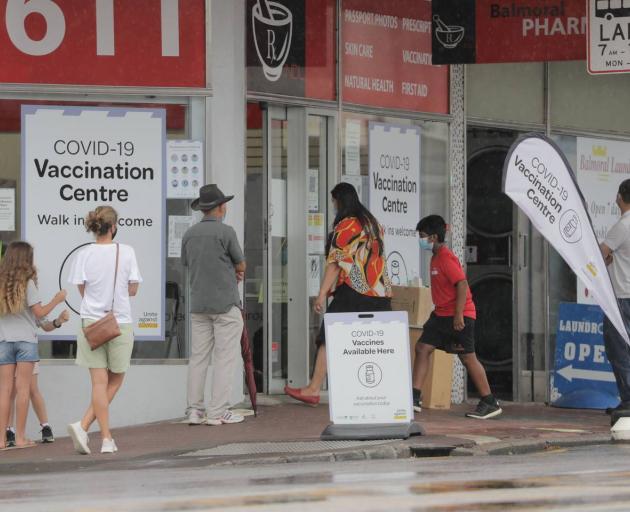 The wait for vaccines outside a Balmoral, Auckland centre. Photo: NZ Herald
Director-General of Health Ashley Bloomfield has told Checkpoint the Ministry of Health is working on the "worst case scenario" that the tipping point to move to phase two of the Omicron response could be in two weeks.

Bloomfield said they were taking an active "stamp it out" approach in phase one, and the transition to phase two would be based on number of cases as well as rate of increase in cases and pressure on contact tracing.

"What we would expect is that that phase would be [brought in] before we hit 1000 cases a day, but we will be taking into consideration a whole range of factors."

He said the transition could happen anywhere from a couple of weeks to a longer period.

"So I guess what we're doing is planning for the worst case scenario which would be that that was in two weeks' time."

The Ministry of Business, Innovation and Employment is working, along with the private sector, on a list of businesses that would be considered part of the critical workforce who could access rapid antigen tests for when the 'test to return to work' approach kicks in.

Bloomfield said that would include critical workers in the supply of electricity, utilities, supply chains, supermarket workers and the healthcare workforce.

"In terms of that 'test to return to work', it won't be necessary in every case, it's just if having a number of staff down does really start to compromise a critical service, then that is when the test to return to work would operate. But in some cases those people will still be able to isolate for what at that time will be the seven-day period if they are a contact."

The list was expected to be available either this week or next, he said.

The government has been accused of having "commandeered" supply of rapid antigen tests (RATs). But Bloomfield denies re-directing the orders that private businesses had placed, saying the government had also pre-ordered and simply asked suppliers for priority.

"I've asked my team to get the list of who those companies [who had pre-ordered RATs] were and how many they had ordered so we can engage directly with them over the next couple of days and just see what their needs might be right now.

"The challenge at the moment is getting clear information from the companies [supplying RATs] about how much and when they can deliver.

"I didn't exercise any specific legal power, I was in discussion with one of the companies and then my team followed up with the others and just created an expectation with them that they would fulfill the government's orders, and again this is an order that is for the entire country, including private businesses."

He said they wanted to ensure they had enough RATs, not just to support critical workers, but also in phase three for use in households for diagnostic purposes.

"I should say over the weekend, we sent out several hundred thousand to health sector providers, GPs, Māori and Pacific providers, so we have already got rapid antigen tests out there, ready for use, where needed."