0 Comments
A spooked robber ran from a Christchurch dairy when the alarm sounded on Tuesday, only to find the getaway car locked - and he didn't have the keys.

The masked robber had to go back inside the Race Course Dairy on Epsom Rd to get the keys off his co-offenders as they continued to raid the cigarette counter.

Jane Ma was in her office at the back of the dairy about 10am on Tuesday, her shop empty, when it all started.

On a screen, connected to the security cameras inside and outside the shop that she had installed three weeks ago, she saw a car pull up into the parking area outside the dairy.

Ma said she immediately "sensed something was wrong."

Ma's partner said he thought it was connected to another attempted robbery of a dairy on Lillian St in Halswell in the early hours of Tuesday morning. 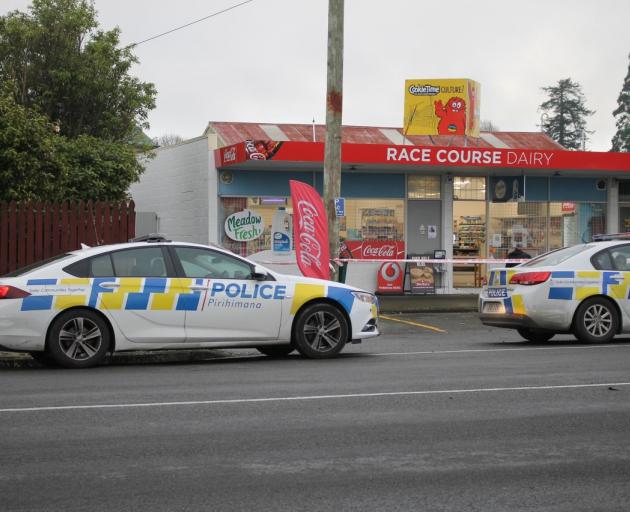 Police at the Race Course Dairy. Photo: Rachel Taylor
The owner of the Halswell Convenience Store did not want to comment. A police spokesperson said they were still investigating both incidents and did not know yet whether they were connected.

Ma described the three people that robbed her dairy as "quite young, teenagers," wearing hoodies and masks.

As they ran into the shop, one person waved a "soft, short BB gun" in the air and shouted: "This is a robbery."

Ma pulled the door between her and the shop's front area closed, pressed an alarm to alert the security company and ran out the back of the shop.

She used her cellphone to call the police, as she rushed over to visit her landlord in the fish and chip shop, Racecourse Takeaways, nearby.

Meanwhile, in the shop, the alleged robbers jumped the counter and raided the dairy's cigarette counter, taking about 16 pouches of tobacco worth up to $2000, said Ma.

"They did not touch the register, which was luckily closed," said Ma.

One person grabbed a rack of lighters, littering many outside the shop as they fled.

"They are idiots," Ma's partner said.

Ma said within 30 seconds the three people had jumped back into the car and driven off.

Other than the scattered lighters, there was no damage to the dairy.

"The most important thing was that no one was hurt, including the neighbours, we are safe. We just lost money," she said.

"Jane did quite well," said her partner, who did not want to be named.

He was out mowing lawns when he got a call from the security company telling him to head to his partner's dairy.

"When you run a business like this where these things can happen, you have to be aware so you can be prepared," said Ma.

At about 9.30am on Sunday, Keyes Road Dairy in New Brighton was robbed by several offenders, who then fled in a car.