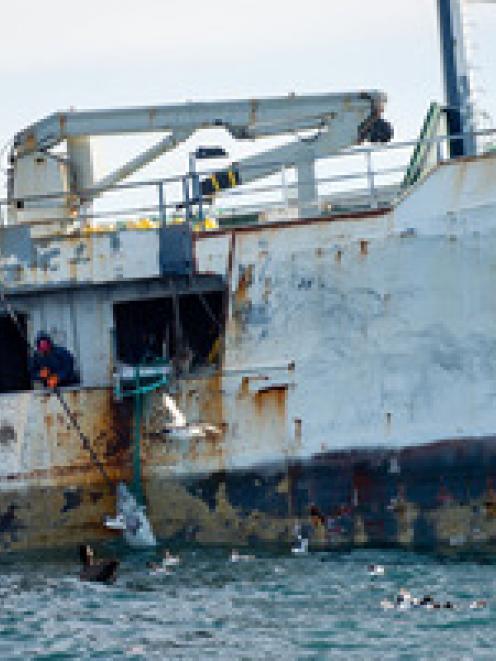 Fishermen haul toothfish out of the Southern Ocean from the MV Kunlun. Photo / NZ Defence
Defence Minister Gerry Brownlee has defended the Royal New Zealand Navy's pursuit of illegal fishing vessels in the Southern Ocean, rejecting claims that the HMNZS Wellington was toothless and easily evaded.

The navy's struggle to board two of three vessels caught poaching Antarctic toothfish in the region prompted calls from New Zealand First for a show of force and questions about the capabilities of the offshore patrol vessel (OPV).

Mr Brownlee said these criticisms were "ill-informed" and ignored the success of the operation.

The Wellington had done a "very good job" in "very challenging conditions" in the rough, icy waters of the Southern Ocean.

"They have successfully located, tracked and intercepted these vessels, and obtained the necessary evidence and documentation to enable further enforcement steps to be taken by the appropriate authorities," Mr Brownlee said.

He said claims about the Wellington's warfighting capability were "a nonsense", and added that the OPV had not been outrun by the three Equatorial Guinea-flagged fishing vessels - the Kunkun, the Songhua and the Yongding.

With navy officials unable to board two of the vessels, further options were now being considered for monitoring the ships.

A spokesman for Foreign Minister Murray McCully this morning said the navy had not been able to board the ships overnight.

He would not confirm if HMNZS Wellington was continuing to pursue the vessels.

"We're deliberately not saying too much about the operational situation down there at moment."

The navy had been urged to escalate a stand-off with the three illegal fishing vessels, with calls for a show of firepower.

The stand-off intensified yesterday with the two ships refusing to let defence officials on board.

HMNZS Wellington was given permission overnight Tuesday to board the vessels, which were flagged to Equatorial Guinea and were not legally permitted to fish in the region. But attempts to board them and inspect their catches have so far failed.

"It is clear this needs escalation. Offshore Patrol Vessels (OPV) are armed with a single gyro-stabilised 25mm Bushmaster cannon and two unstabilised .50 calibre machine guns. ... It should be ... sufficient to send a warning shot across the bow.

"Ultimately, New Zealand is exercising our legitimate legal rights and should these vessels refuse boarding then we must be prepared to use force."

Mr McCully said yesterday: "HMNZS Wellington attempted to exercise its legitimate right to board the Yongding and the Songhua ... but the vessels refused to co-operate."

Equatorial Guinea told New Zealand officials it was believed the vessels were fishing illegally and agreed the Navy should board them and verify their flag status.