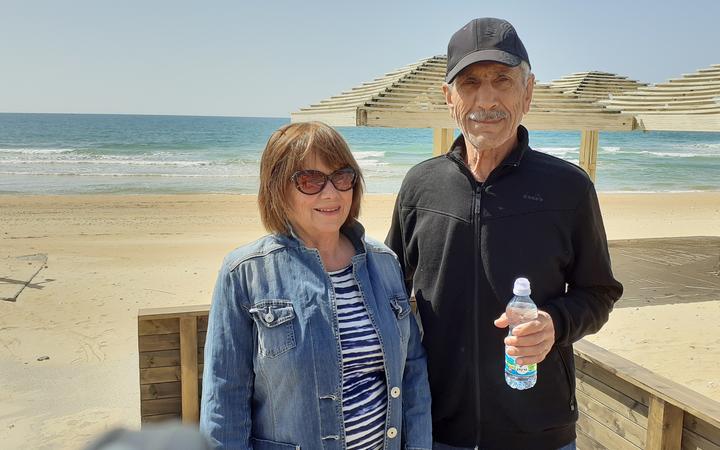 Cate Frey and Nahib Mansour. Photo: supplied
A New Zealand couple stranded in Israel is desperately hoping commercial flights will resume soon, so they can get home to Rotorua.

They arrived on March 9, from Jordan, just as Israel's response to Covid-19 was ramping up and there was talk of the borders closing.

"As we were driving up the Jordan valley in this rickety old taxi, we got a text saying they might be going to close the border and we had to decide whether to turn back and come back to New Zealand or to carry on," Frey said.

They decided to carry on, because at that time the situation with Covid-19 was not as serious as it is now, and Mansour's brothers are quite unwell.

Israel is now in lockdown and the borders are closed.

Frey said Israel's lockdown was similar to New Zealand's and they were able to go outside for walks, although everyone was keeping their distance.

While they we staying with family, Frey said they were anxious to get back to New Zealand.

"There's been no flights we could get really, for the last couple of weeks," she said.

She said if they could not get a commercial flight in the next few weeks, their options for getting home were extremely limited.

"Then I would really urge the New Zealand Government to do whatever they can to help us get back and we're happy to repay them."

Frey said they were registered on SafeTravel and they had made contact with the New Zealand embassy in Turkey.

She was not sure how many other New Zealanders might be stranded in Israel as well.

Gathering limit to increase to 100 on Friday