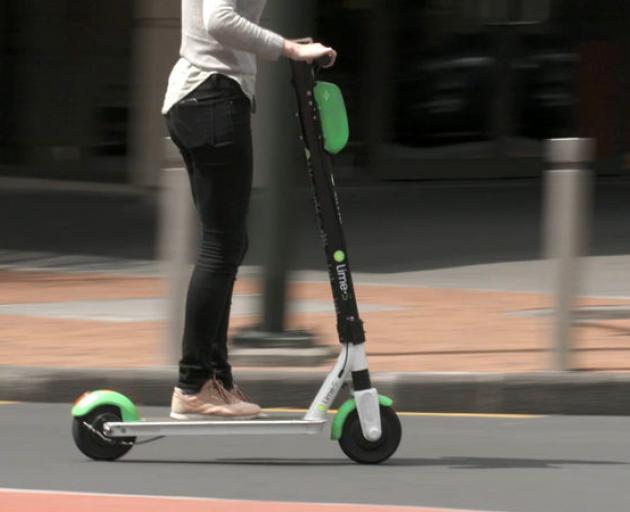 Photo: RNZ
Newly released documents show road control authorities were pushing for a speed limit for scooters on footpaths of just 10kmh more than a decade ago.

They also showed the New Zealand Transport Agency's predecessor, the Land Transport Safety Authority (LTSA), flip-flopping on that speed limit, before eventually shooting it down.

The situation today - where there is no speed limit for the several thousand e-scooters allowed on footpaths, although they are capable of doing almost 30kmh - is directly due to a road rule made in 2005.

This was when, according to the transport agency, the only substantive research into e-scooters was done, even though e-scooters were not widely available then.

The documents - newly released under the Official Information Act - show the regulators themselves were at odds.

In 2001, the LTSA opposed any speed limit on footpaths. Instead, it favoured "careful and considerate'' use of scooters, skateboards and mobility scooters at a "reasonable'' speed.

But other regulators made their position clear in a 2002 consultation paper: "Motorised recreational devices and wheelchairs must not be capable of exceeding 10 kilometres an hour,'' said one.

Police wanted a speed limit too, at least on mobility scooters: "Police still believe there is a need to retain a speed restriction as otherwise manufacturers would be left to determine their own standards.''

Half the 110 submitters opposed the road rule change proposed by the LTSA, mostly around the risks to pedestrians, outnumbering those who backed it almost two to one.

In late 2002 the LTSA did a U-turn and proposed a 10kmh speed limit on footpaths after all, and went further: "It was broadly accepted that scooters and similar devices should not be operated on the roadway. On balance, the use ... on the road would place the rider at great risk of serious injury or death.''

Had that stood, e-scooters would be banned from the road today, and restricted to 10kmh or under on footpaths.

The LTSA flip-flopped in late 2003 when it dropped any speed limit and proposed scooters be allowed on the road after all.

This was partly at odds with the Ministry of Transport.

"The ministry believes ... devices should be able to travel on the footpath or the road but if they are on the footpath then they must give way to pedestrians. The ministry also feels that the 10 kilometres an hour speed limit provision should remain,'' a September 2003 briefing to the Transport Minister said.

The LTSA got its way, the ministry did not.

This public consultation in 2002-03 was the only one there has ever been related to e-scooters.

In late 2004, the transport minister signed off on the road rule changes. These remain in force today, though were so confusing that as late as September NZTA believed e-scooters were banned from footpaths.

The OIA record shows NZTA has not done a single local risk assessment of e-scooters.

The agency and the Transport Ministry declined interviews.

Both issued statements saying they were working on a regulatory package to improve safety and accessibility on footpaths, called "accessible streets''.

The ministry expects that to go to public consultation later this year, and that any changes will be in place by the middle of next year.