Shivers! Sea snake should shake off the cold 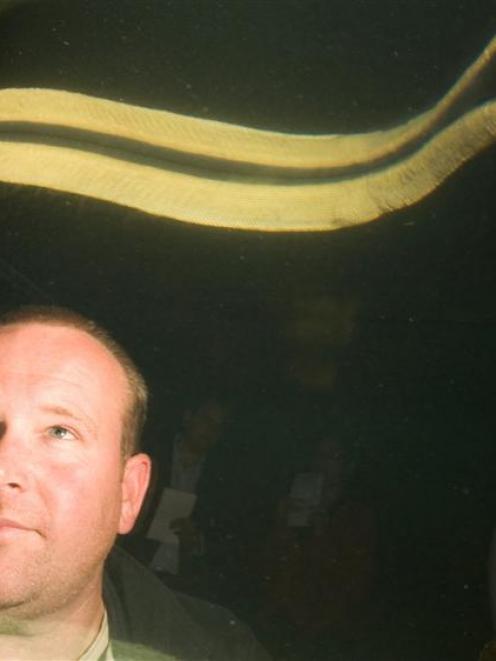 The species comes ashore only if sick, and the snake was in poor shape when it was found in Northland on Wednesday.

Three or four sea snakes sometimes wash up in a year in New Zealand, but they are usually dead.

Yesterday, as centre curator Andrew Christie weighed the 1.53kg adult snake, it had a case of the shivers and groggily moved around as it was handled. Dehydration and cold shock had taken their toll, Mr Christie said.

But when the sea snake - it is not known whether it is a male or female - took a sudden lunge upwards, the signs started to look good for rehabilitation.

‘‘For him to start driving up, he's still got that muscle power,'' Mr Christie said. ‘‘It's an amazing animal. I think he's going to be all right. He looks in good nick, he's actually putting up a good fight.

As a member of the cobra family, this particular sea snake is thought to be 10 times more venomous than any land snake.

Warm currents are thought to have brought the traveller from Tonga. It washed up on Baylys beach near Dargaville.

While sea snakes gather en masse for breeding, not much more is known about their habits.

It will call Kelly Tarlton's home until winter passes, and fattened up before release. - The New Zealand Herald