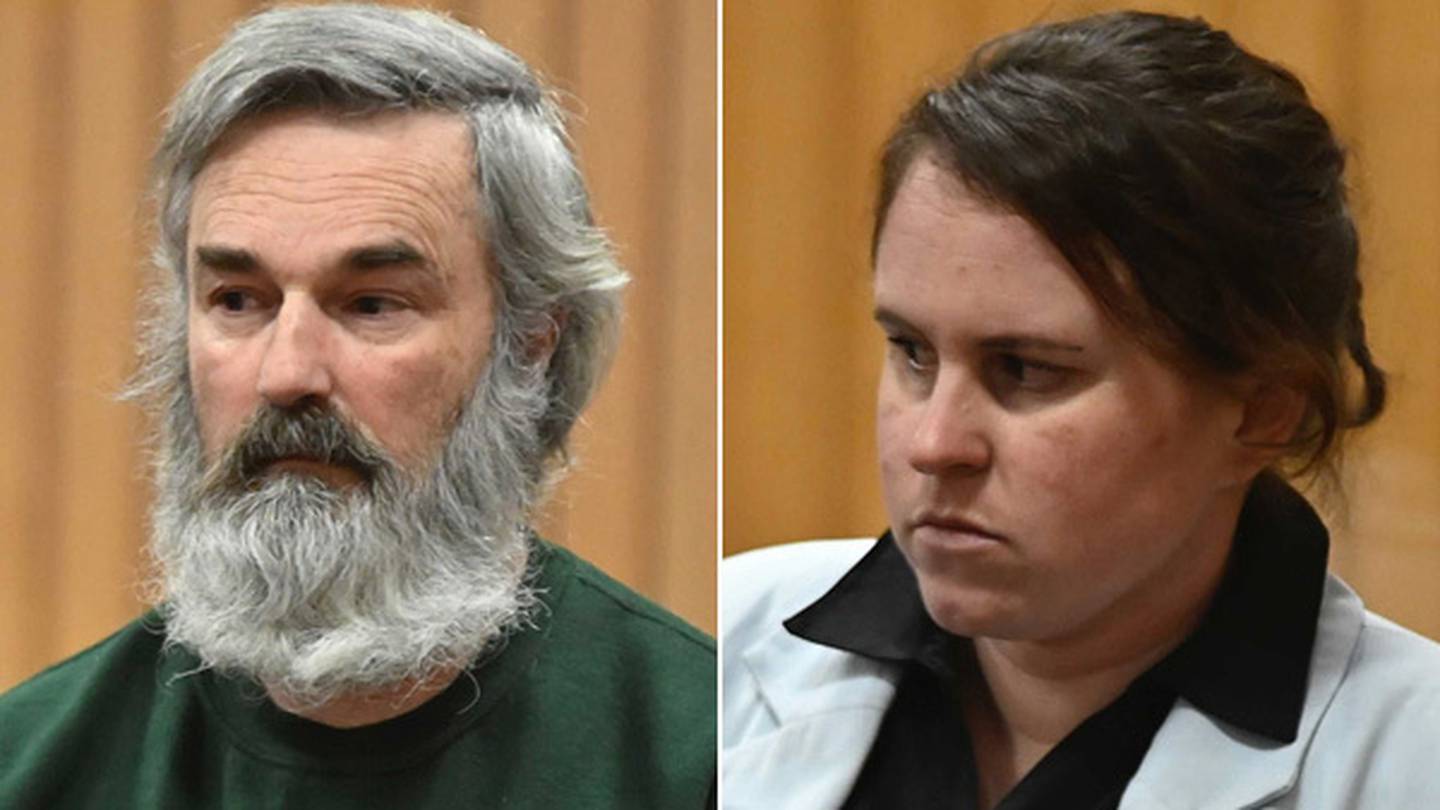 Laken Maree Rose (right) and Andrew Alan Williams (left) appear at the High Court in Rotorua for sentencing today. Photo: NZ Herald
A Waikato woman and her former partner have received lengthy jail terms for a string of horrific sexual abuses of young children, including the rape of a child aged 3.

Rose was sentenced to 19 years and five months' prison, with a minimum non-parole period of seven years nine months by Justice Matthew Muir.

Justice Muir said it was hard to imagine a "more egregious" sexual offending prosecution case and the words "sickening and depraved" came readily to mind.

Rose's charges included six counts of rape, nine of sexual violation by unlawful sexual connection, 16 counts of indecent assault, and seven of inducing indecent acts to be performed on a young person.

Rose was also found guilty of a total of five charges of making and possessing objectionable publications, and three of attempted sexual violation.

They related to four girls aged between 3 and 13 at various locations, including the Bay of Plenty, Palmerston North and the Waikato.

Rose also admitted nine charges of inducing a young person to commit an indecent act, in relation to a 14-year-old victim and a charge of knowingly making an objectionable publication, being a recording of a video showing the sexual exploitation of a girl aged between 13 and 14.

Rose claimed she was a victim of domestic abuse and had been compelled to participate in the abuses under duress from her ex-partner and co-offender Andrew Alan Williams.

She insisted Williams, 54, had threatened to kill her if she did not film him abusing the victims.

A psychiatrist gave evidence that Rose suffered from a dependant personality disorder.

However, Justice Muir said he found limited evidence of domestic abuse nor evidence of threats of harm by Williams in the more than 2000 texts he had reviewed.

Rose did not come across as fearful in the various video clips and never mentioned any abuse to a friend of 10-years and a police detective with the Hamilton CIB Child Protection Team, the court heard.

Williams, who pleaded guilty to 55 charges on the day of his trial, was sentenced to 23 years and five months' prison, with a non-parole period of 9 years and four months.

His crimes were against seven children aged between 3 and 14, and which took place at various locations in the Bay of Plenty, Waikato and Palmerston North, between January 1, 2015 and March 10, 2019.

Rose and Williams' offending came to light in March 2019 while they were living together in Cambridge after a complaint was made to the police in Katikati.

Ahead of Justice Muir's sentencing comments, a parent of one of the rape victims read their harrowing yet powerful victim impact statement in court.

As they walked past Williams and Rose into the body of the court, the parent paused and glared.

The parent said they were there to speak about the devastating effects the crimes had on their family and the other families.

"Your actions lead police detectives to visit our family and deliver devastating words.

She likened the experience of sitting in the courtroom and hearing the "horrific and shocking details" to grief.

"I feel this massive guilt that I had not been able to protect my child, that is something that will never go away."

The parent took aim at Rose for her decision to defend most of her charges, and also making the families sit through the ordeal of a trial.

"I will never understand how you, an adult female, a daughter, a sister, a human being, put these precious, beautiful, innocent, trusting children in a dangerous predator's hands.

"Let us not forget that Ms Rose you did more than just casually put them in danger. It was your idea, you went and found these children ... you suggested hunting acquaintances' children as your weekend activities.

Laken Rose and Andrew Williams were sentenced in the High Court in Rotorua today. Photo: Supplied
"Your actions violated these children just as much as [Williams], if not more than in my eyes. You could have stopped it all and protected the children."

The parent said the victims' innocence had been taken.

"The ease that paedophiles and psychopaths walk around unnoticed among us shocks me and is something I will never forget."

The parent also slammed Williams, saying he "decided in his sheer arrogance" that no-one would believe the children over him and he had been proved wrong.

The parent said the depth of the children's suffering was "immeasurable" and her pain and the pain of the other families may never go away.

In a written statement released after the sentencing, Detective Sergeant Darryl Brazier of the Western Bay of Plenty Child Protection Team said the offending by Rose and Williams had a horrendous impact on the victims and their families.

"While nothing can reverse the terrible ordeal the victims and their families have suffered, I hope that the sentencing today helps provide a small measure of comfort to them.

"This outcome is a great result for the team of hard-working investigators who worked tirelessly to hold these offenders to account."

He said they were exposed to a huge volume of distressing material during the investigation, but remained focused and professional throughout.

"This is also a great result for the community who can be assured that these offenders are being held to account through their conviction and sentencing.

"Most importantly, this is a great result for the brave young victims and their families, who had the courage to talk to police and help bring these dangerous offenders to justice.

"I would like to thank them for the cooperation and the incredible strength they have shown throughout the prosecution, and my thoughts and support remain with them as they get through this horrific time.

"I have no doubt that had the families not come forward when they did, and police took the action required, these two would still be in the community offending against vulnerable young children."

Sexual harm - Where to get help
If it's an emergency and you feel that you or someone else is at risk, call 111.
If you've ever experienced sexual assault or abuse and need to talk to someone, contact Safe to Talk confidentially, any time 24/7:
• Call 0800 044 334
• Text 4334
• Email support@safetotalk.nz
• For more info or to web chat visit safetotalk.nz
Alternatively contact your local police station - click here for a list.
If you have been sexually assaulted, remember it's not your fault.