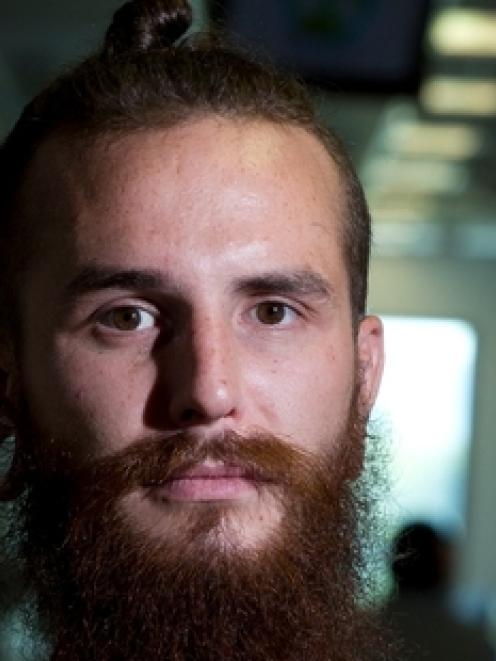 A lapse of concentration almost cost Harley McEwan the fingers on his right hand. Photo NZ Herald.
When Harley McEwan's lawnmower stalled while mowing, he instinctively used his hand to remove the sticks and grass caught between the machine's cutter blade -- without stopping the motor.

On Monday, the 26-year-old Whangarei man's "moment of madness" shattered his finger bones and nearly cost him two fingers on this right hand.

"It's just two seconds of not thinking and boom, it's like a grenade had exploded and blood was all over the place.

"It's so embarrassing because it's so stupid ..."

The surgical quality unit staffer had seen dozens of such injuries already this summer, including from people who injured their tongues tasting straight from blenders that were still switched on, and others from smashing windows because they got locked out after a night out.

Mr McEwan said he "just wasn't thinking" when he stuck his fingers into his lawnmower.

He was rushed to Whangerei Hospital and then taken to Middlemore Hospital where he underwent a four-hour operation to save his fingers which included having a bone graft and the lacerations sutured.

"It's a massive surgery because of my moment of madness, but I still consider myself lucky that I've still got my fingers," he said.

Mr Stewart said the warm weather was getting more people out of the house but it also meant more were getting injured outdoors.

"Summer is a time where we get a lot of sporting injuries, but we've also got lots of injuries that happen because people don't engage their minds," he said.

"All it takes is one lapse of concentration and it can change your life forever."

These include people who suffered deep cuts because they didn't wear shoes for lawnmowing and chopping their fingers because they tried to separate and cut patties for the barbecue while still frozen.

He also cited several cases of chainsaw injuries to hands and other body parts of people who didn't wear goggles or gloves.

"People should just really, really think about what they're doing," Mr Stewart said.

"For me as an example, when I drop a teaspoon into the waste disposal I used to just fish it out, but it's only recently that I thought, 'Well I could trigger it and it could go off', so now I turn off the power before I fish it out."

By Lincoln Tan of the New Zealand Herald