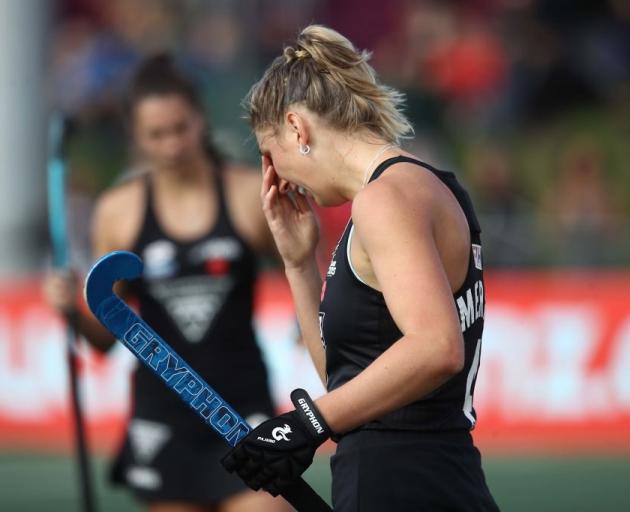 Black Sticks player Olivia Merry was hit on the face during the match against Australia. They lost 5-1. Photo: Getty Images
Spark Sport's live streaming has hit another snag, with its customers annoyed over issues during the Black Sticks hockey match this afternoon.

The Anzac Day clash between the Black Sticks Women and Australia was meant to be shown on Spark Sport, but fans weren't able to see the match initially, with the broadcast being "delayed due to technical difficulties", and the Black Sticks having to direct people to their Twitter feed to follow the match.

While the problem was eventually resolved and customers were able to watch, or view the full broadcast on demand later this evening, the technical issues left many fans disgruntled, and questioning Spark's abilities to broadcast the Rugby World Cup later this year.

Please can we have updates as spark sport is down and no live coverage— Robin owens (@Robinowens) April 25, 2019

"This is a bloody joke! And you think you're going to successfully show the RWC?? Play it on Duke then so that at least I haven't wasted my free trial for nothing," said one customer on Facebook.

"Looking good for RWC, when they can't even handle a small audience for Hockey! This subscription based world we now live in only works if your product is worthy," added another.

This is not the first issue Spark Sport have had with their streaming service, which many New Zealanders will be reliant upon if they want to watch the World Cup in Japan come September.

During their stream of the Bahrain Formula One Grand Prix earlier this month, on-demand versions of the final practice session and the pre-qualifying race stalled with error messages.

There were also gripes about the fact that while Spark Sport runs no ads of its own, it does have gaps in its coverage for when the host broadcaster, from whom it's taking a feed, goes to commercials.

Spark planned a full review of that weekend's issues, and may have do so the same after today's drama, apologising to their customers for the trouble caused.

As it turns out, some fans were probably better off not watching the hockey, as the Black Sticks Women were smashed 5-1 by their transTasman rivals.