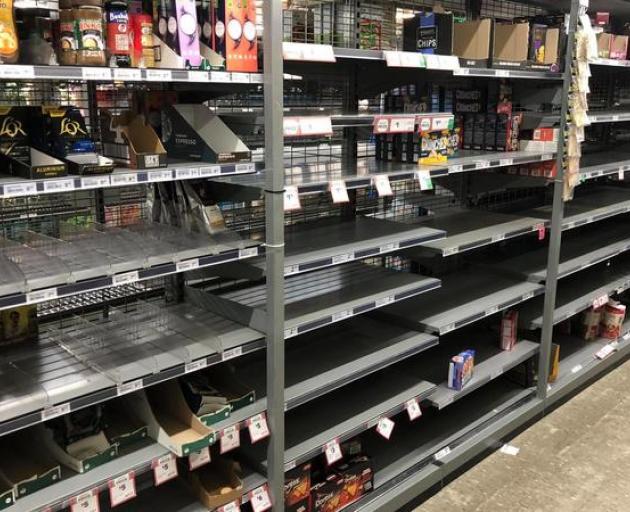 Empty shelves on the day before lockdown Photo: Photo: RNZ
Supermarkets and food retailers deny they have increased their prices, as panic buyers continue to strip shelves of the basics.

Some customers have taken to social media to complain that prices of items like soap, meat and fresh veggies have increased sharply ahead of the Covid-19 lockdown that takes effect at midnight on Wednesday for at least four weeks.

But supermarkets said their prices have not changed and they were working around the clock to keep up with skyrocketing demand. The sector has hired nearly 1000 extra workers over the past 10 days.

Mike Rehu from Auckland said he got a shock when he did an online shop with Countdown Greenlane on Monday; things were noticeably more expensive between the same basket of items be bought on on March 13 and March 23, he said.

The student and occasional broadcaster is not the only one to notice a difference.

Hastings District councillor Henare O'Keefe, from Flaxmere, said he had been inundated with complaints about rising prices from locals shopping at Pak n Save and New World supermarkets in Hastings and Napier.

"The feedback I am getting is that prices are gone beyond what people can afford. Rice, mince, hand sanitiser...all those essentials."

This meant those on lower incomes were going without, he said.

Countdown said it had not increased its prices.

"We haven't put any of our standard shelf prices up in any Countdown store across the country, and we're very sensitive to making sure we deliver value for our customers in this particular time of need.

"As with any week, customers may see produce and meat prices fluctuate due to seasonal or market demand," it said in a statement.

It declined to elaborate on how much produce had fluctuated recently, saying it was too busy to answer this question.

Foodstuffs, which owns Pak n Save and New World, did not answer questions from RNZ about whether its prices had risen.

"Covid-19 has turned everything on its head, and right now our only focus is getting the essential products on the shelf for our customers.

"We have no intention of increasing prices during these extraordinary times, and we are working hand-in-hand with our suppliers to keep key products on the shelves across New Zealand," it said in a statement.

Meanwhile, some Mad Butcher customers had taken to social media to complain about the meat retailer raising its prices, but chief executive Mike Morton said that was also not the case.

"There might be some confusion around that the fact that often we do a whole lot of fixed price packs, which we can't do now right now. We have been absolutely inundated but all our retail prices have stayed the same."

Morton said sales had increased more than 60 per cent in the last week, and all its head office staff are all now helping on the shop floor.

Paymark figures show spending at food and liquor outlets - including supermarkets topped $111 million on Monday - up 157% on the same time last year.

Foodstuffs had hired 949 people in the last 10 days to cope with demand, it said.

All supermarkets said there was plenty of product, and they would remain open throughout the Level 4 lock down and urged people to shop safely and normally over the coming weeks.

Some items at Countdown Mosgiel were over 50% more expensive this week than typically prices (wash liquid, baked beans, coffee) - pure profiteering in this current crisis. When will the Government run an inquiry into pricing in NZ (and don’t tell me it’s supply & demand! Food from NZ is half the price in London compared to what we pay here).

""As with any week, customers may see produce and meat prices fluctuate due to seasonal or market demand," it said in a statement", so yes, prices have risen. They said it themselves "market demand" so they increase prices.