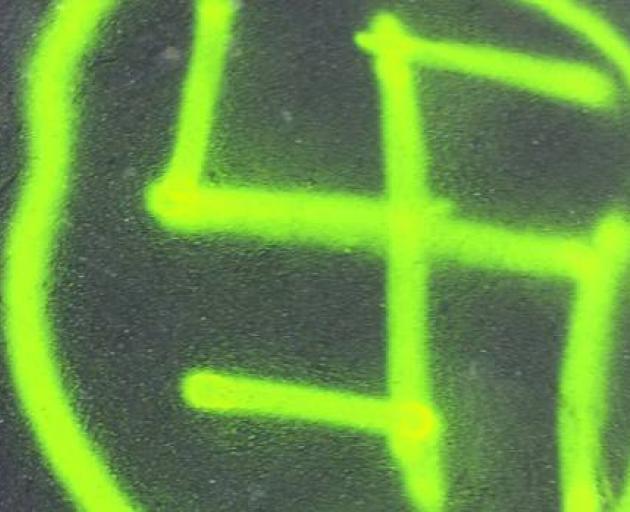 One of the swastikas painted on the footpath on The Terrace. Photo: NZ Herald
The Jewish community is on guard after fluorescent yellow swastikas were spray-painted outside Temple Sinai in Wellington, as well as several other inner-city locations.

Wellington City Council received reports this morning of graffiti on different parts of the footpath on The Terrace and outside the Wellington Jewish Progressive Congregation on Ghuznee St. It has since been removed.

Photographs supplied to the New Zealand Herald show swastikas were painted and the word "Heil".

It comes as Israel this week hosts the Fifth World Holocaust Forum, marking the 75th anniversary of the liberation of Auschwitz-Birkenau and international Holocaust Remembrance Day.

New Zealand's absence from the event has been called disappointing by the New Zealand Jewish Council and labelled disgraceful by the Opposition. 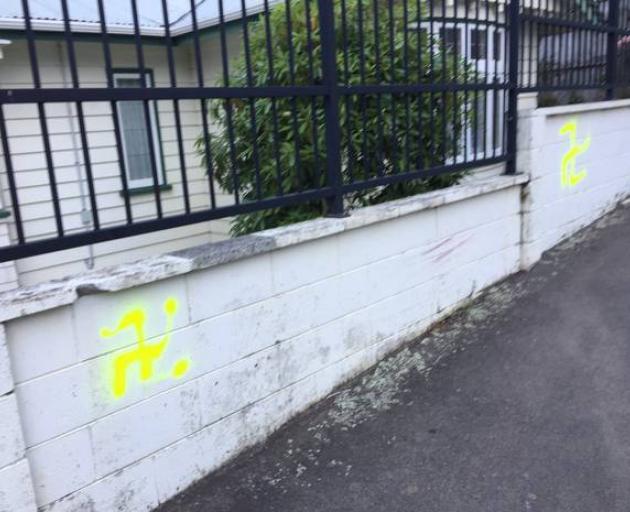 Temple Sinai chair Matthew Smith said the timing of the graffiti with the event in Israel possibly wasn't a coincidence.

The congregation was grappling with uncertain times, he said.

"Events in New Zealand over the past year and beyond that has left us with a sense of insecurity and vulnerability.

"There's just been this heightened awareness."

Members were a target of several groups but in particular white-supremacists and neo-Nazis, he said.

"I'm upset by it and outraged by it, that we are targeted like that, but at the same time I'm not entirely surprised."

Smith said incidents like the graffiti had the potential to escalate.

"So it's put us very much on guard and in some respects it vindicates our position in that we need to be very mindful of the security and safety of our members because things even in New Zealand are quite uncertain."

The congregation was being told to be watchful, especially as they were coming and going from the temple, and to report anything that made them unsettled or feel unsafe.

"The reality is in New Zealand Society and as New Zealand citizens we should feel entitled to feel safe and practise our religion in safety and with the knowledge that we can do that freely, and the fact this goes on is very disconcerting", Smith said.

Cameras at the temple had not captured those responsible.

Lambton Ward councillor Nicola Young said she was appalled by the graffiti.

"I've always been proud as a New Zealander that we don't have the blight of anti-Semitism in this country."

"There are some really sick people out there and as a Wellingtonian I feel ashamed."

Police confirmed they received a report of wilful damage about 9am this morning regarding a number of properties in the area of Ghuznee St and The Terrace.

Inquiries into the incident are ongoing.

Any info the police glean to be shared with GCSB.