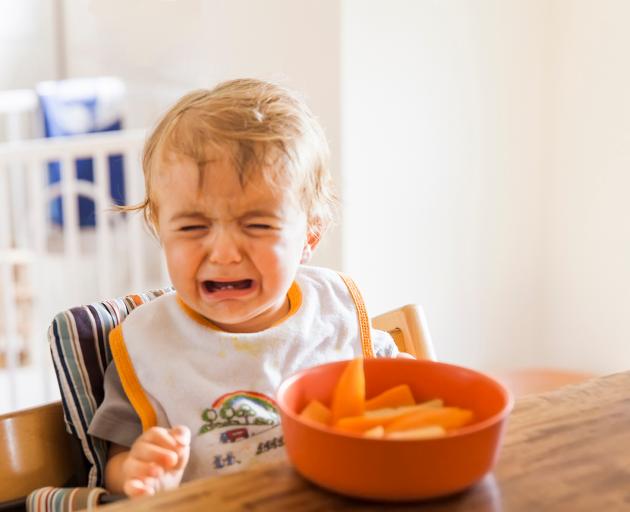 Jennifer Anne Sullivan was found to have forced a forkload of food into a 2-year-old's mouth at Whitby Educare near Wellington in November 2017.

The second teacher, who has been struck off the teaching register for smacking a 4-year-old boy on the bottom, has been granted name suppression partly because of his new career as an Auckland real estate agent.

The Teachers Disciplinary Tribunal has found that both teachers breached the 2006 anti-smacking law which banned the use of force "by way of correction or punishment".

Sullivan was head teacher of Whitby Educare at the time and had been teaching for 20 years.

An agreed statement of facts said she "used one of her hands to firmly hold [the child's] head and to squash open his mouth".

"[The child] resisted by letting out a loud cry and screaming 'no', and moving his head from side to side," the statement said.

"Using her other hand, Ms Sullivan forced a forkful of food into [the child]'s mouth.

"The incident was witnessed by two other teachers, one of whom described the level of force as a 4 out of 5 (1 minimal, 5 forceful)."

Sullivan told the tribunal's complaints assessment committee that she had agreed with the boy's mother to try getting him to eat one mouthful of food because of "a range of behavioural challenges at home, including mealtimes".

"Because [the boy's mother] was implementing what we had decided to work on together and she asked, I said I would do the same at the centre," she said.

"'In hindsight, huge error of judgment. I did it on that day; it was one mouthful and then after a huge meltdown on [the boy's part] he chose to finish his lunch.

"When mum picked him up that afternoon I said that I didn't feel comfortable doing it and that is why it was a one-off event. I went against my better judgment to support a family that was clearly struggling.

"I have had a year to reflect on this one minute of my 20 years as a teacher. I know it was wrong but I totally take ownership of what I did and never denied what I did."

The tribunal found that her action constituted physical abuse as well as being a breach of the anti-smacking law.

"We question why there was any need to 'correct' this behaviour at all. This 'method' has no place in any teaching environment in this century," the tribunal said.

However it did not cancel Sullivan's teaching registration, saying she "has a positive contribution to make to the teaching profession". She was censured, and was ordered to attend an Incredible Years teaching programme and to notify any employer in the next 12 months about the tribunal decision.

In the Auckland case, the teacher was described as having had a "distinguished career teaching in another country" and was "a person of standing in his community, particularly within the particular migrant community in Auckland".

He obtained a provisional NZ teaching certificate but that had expired in 2014 and he was teaching at an early childhood centre as a casual reliever when the incident occurred in August 2017.

An agreed statement of facts said the man brought a 4-year-old boy over to speak to another teacher about the boy's behaviour.

"When the teacher began speaking with the boy, [the respondent] suddenly hit the boy on the boy's bottom with an open hand, and then rubbed the boy's bottom," the statement said.

"The teacher noted that [the respondent] was not angry when he hit the boy, but did appear to be slightly frustrated.

"The teacher asked the boy if he was okay. The boy did not respond and kept quiet."

The tribunal said it "did not appear that the child was particularly upset" and commented that it would not have cancelled the man's registration if he had continued as a teacher.

However the man had since resigned and had undertaken never to work as a teacher again.

The tribunal found that his action was physical abuse and was "an assault that has no place in the classroom".

It cancelled his registration because he was not willing to "engage in rehabilitative measures".

But it suppressed his name because of "a combination of the implications for the respondent's daughter's health along with the potential impact on his new career, which we acknowledge is commission-based and relies to a certain extent on connections and reputation".

Has anyone considered the issue is a 2 year old doesn't like daycare? Continual cortisol stress levels do that.