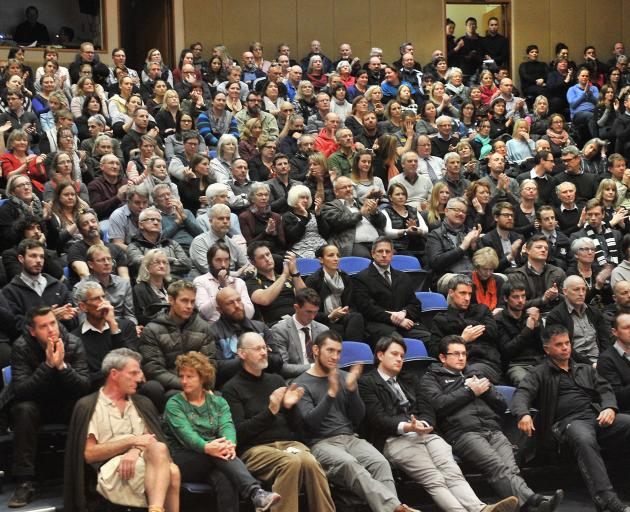 Secondary school teachers at a meeting in Dunedin earlier this month. Photo: Christine O'Connor
The country's teachers are set to vote on whether to accept a Government pay offer or take widespread industrial action.

It comes as the nation's nurses look set to strike for two days.

New Zealand Educational Institute (NZEI) Te Riu Roa national executive will leave the decision up to whether to accept the Ministry of Education's pay offer up to its members later this month.

Teachers and principals will also be asked to vote on whether a nationwide half-day work stoppage should take place from 1.30pm to 4.30pm on 15 August so members could attend union meetings. It would also mean schools would close for a half a day.

NZEI lead negotiator for primary teachers collective agreement Liam Rutherford said it was up to members to decide whether they wanted to accept the offer.

Louise Green, a lead negotiator for the primary principals collective agreement, said teachers would be considering the significant issues facing education, including a growing teacher shortage, stress and workload problems and under-resourcing when they attended the union meetings later this month.

Voting will occur by secret ballot at the paid union meetings of primary, intermediate and kura teachers and principals between 18 and 29 June.

Last week NZEI said the offer tabled by the ministry after days of negotiations to offer a pay rise ranging between 2.2 and 2.6 per cent a year for three years for most primary school teachers was a far cry from the 16 per cent increase over two years that teachers thought necessary to address the shortage.

MoE deputy secretary early learning and student achievement Ellen MacGregor-Reid said, at the time, the ministry had put a fair offer on the table and would continue to negotiate in good faith.

Nursing union members are also likely to stage two 24-hour strikes in July after being disappointed with a revised pay offer from the DHBs.