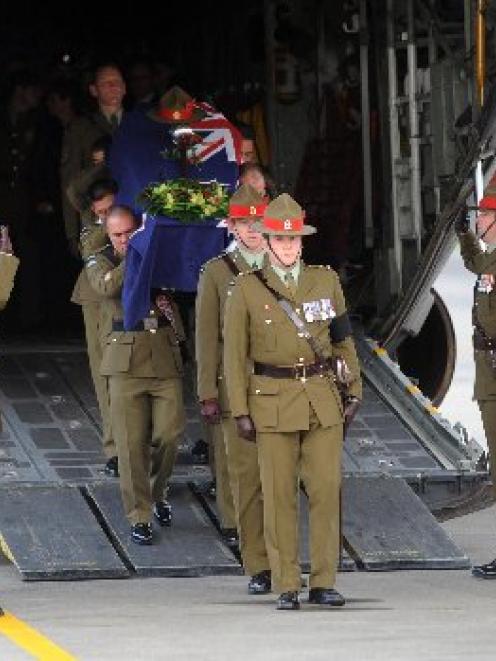 The casket holding the body of Lieutenant Tim O'Donnell, who was killed in Afghanistan, arrives at Ohakea yesterday. Photo by NZPA.
The New Zealand Army's first Afghanistan war casualty has returned home to Feilding after an emotional ceremony at Ohakea Air Force Base.

A casket containing the body of Lieutenant Tim O'Donnell (28) arrived on an RNZAF Hercules yesterday to be formally received back into the New Zealand Army and taken to his family.

Lt O'Donnell was killed last week when a homemade bomb exploded under a patrol convoy in Afghanistan's Bamiyan province.

Two of Lt O'Donnell's men, Lance-corporal Matthew Ball (24) and Private Allister Baker (23), were wounded alongside him.

Pte Baker attended yesterday's ceremony in a wheelchair, his leg in a cast.

Prime Minister John Key and top military officers also received the coffin at the base.

Once the Hercules' massive engines were shut off near dusk, a sombre silence fell over the base for half an hour, punctuated only by the crying of Lt O'Donnell's mother and later prayers recited as family gathered on the plane.

Lt O'Donnell's father, Mark, approached the coffin with his hands to his face.

His mother, Maryanne, was visibly distraught.

A loud haka finally broke the silence as the casket was carried from the plane to a hearse.

Lt O'Donnell's uncle, Barry O'Donnell, said afterwards it had been a sad occasion but the family also felt a "huge sense of relief" to have him home.

"I think waiting was the hardest part. We won't feel good, but we feel better," he said.

It did not matter whether anyone else - including himself - believed in the Afghanistan mission, because that was what "Tim" had wanted to do, Mr O'Donnell said.

Another uncle, Trevor Farmer, said a military ceremony was just what his nephew would have wanted.

"Tim would've loved it - what appeared to be the whole military high command giving him a salute."

There will be a full military ceremony on Wednesday to honour Lt O'Donnell before his cremation.

Army chief Major-general Rhys Jones said he had known Lt O'Donnell well, particularly as someone with a "spark".

He had joined the army because he wanted fun and excitement, Maj-gen Jones said.

"He was a character and had a spark that really gave him the ability to lead well and be respected by his soldiers but also by his peer group that loved him.

"His antics sometimes got him into trouble, and sometimes he did exceptionally well."

It was a bittersweet time as the body came back home, Maj-gen Jones said.

"The reality is the military go where it is dangerous and deaths on operations are things we have to accept and move on from."

Prime Minister John Key said it had been a tragedy for New Zealand and he had passed on his condolences to Lt O'Donnell's family.

"As Prime Minister, I'm not sure I can think of anything worse than having to receive home a New Zealand soldier in a coffin," Mr Key said.

"But I know his actions are part of a contingent of New Zealanders trying to make Afghanistan a stabilised and safer place for the rest of the world."

Lt O'Donnell is the first casualty for the New Zealand Army during its seven-year operation in Afghanistan, and its first on operations for 10 years.